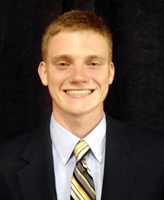 Villanova University College of Engineering student Christopher Wilson, ’16 ME, along with his Ethics Bowl teammates James McConeghy, Kate Walsh, Ryan Rew, Akash Dagur and Stephanie DiNardi, earned an invitation to the National Intercollegiate Ethics Bowl after competing in the Northeast Regional Competition, held at Sacred Heart University in Fairfield, Conn. on November 23. The national competition, presented annually by the Association for Practical and Professional Ethics, will be held in Jacksonville, Fla. on February 27, 2014. Villanova will be joined by 32 top teams from the regional competitions, and Providence College, Union College, Colgate University, and Marist College from the Northeast.

The regional competition consisted of three rounds in which each team debated 15 different ethics cases, ranging from business practices to medical policy. Each member of the team was responsible for arguing three cases. Some of the issues debated during the competition included the use of sweatshops in Bangladesh and the rights of surrogate mothers. Villanova’s team competed with a total of 26 teams from 19 different universities, placing fifth in the competition and qualifying for the national competition, which follows a similar format.

When asked why he became involved with the ethics bowl, Christopher, a sophomore majoring in Mechanical Engineering, explained, “I want to pursue a well-rounded education in disciplines not only within the College of Engineering, but in other fields as well.” He joined the team this year while taking the University’s core ethics course, “The Good Life: Ethics and Contemporary Moral Problems.” The course is taught by Dr. Mark Wilson, who also coaches the team.

One of the more difficult scenarios Christopher has debated involved Indian drug companies’ use of evergreening, a business strategy that allows companies to obtain new patents and charge higher prices by minimally altering drugs. For his case, Christopher addressed the issues of international property rights and citizens’ rights to healthcare.

Christopher also notes the importance of ethics within the field of engineering. “As an engineer, it’s important to consider different factors outside the mechanical aspect of the field. Whatever you are making will alter lives and it’s important to place a human signature on the product,” he says.