Engineers Embracing the Artist Within 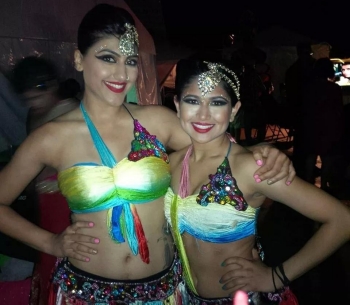 Priya Shah ’16 ME (right) with Kahini, a professional dancer.

It’s not every day you see a Mechanical Engineering major dancing at the Indian Oscar awards in Tampa, Florida. In April, however, Priya Shah ’16 was given a once in a lifetime opportunity to share the stage with some of the nation's best dancers as part of a celebration of Bollywood’s biggest stars. Her “dreams came true” when she learned she was one of only 18 dancers selected—from more than 5,000 applicants—to become a background dancer for the Iifa Awards production, also known as the “Indian Oscars.”

Despite a week of training in Florida before the show, during a particularly busy time in her Villanova courses, Priya admits she couldn’t pass up the opportunity. “We were performing with the dance company of Shiamak Davar, a famous choreographer from Canada,” explains Priya. “He personally supervised our training.” The week proved to be both physically and mentally exhausting, with a normal day beginning at 8:00 a.m. and lasting until three in the morning, but Priya has no regrets: “I still have trouble believing that I had the opportunity to meet such great people, including the movie stars that I grew up watching, and that I was able to work with some of the best choreographers and dancers from India. This experience was one of the greatest of my entire life.”

Priya has been dancing since third grade, and enjoys a wide variety of forms, from hip-hop and contemporary dance to Bollywood and Bhangra. When asked why she chose to major in engineering, she said: “I love physics as much as I love dancing, and I knew that at a school such as Villanova, I could do both. As the captain of the fusion dance team, Nova Nassa, I get to choreograph, while my internship as the project manager for the College’s Roboboat/RobotX team puts my engineering skills to work.” Priya notes that through her experiences this year she has learned a lot about herself, “I have many goals set for myself, but I plan to take each challenge as it comes, embracing every opportunity that comes my way.” 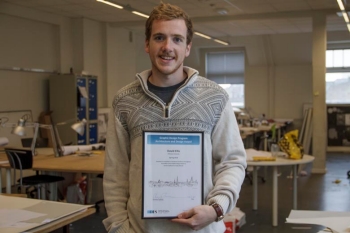 David Ellis ’16 ME with his graphic arts award.

Fellow Mechanical Engineering major David Ellis ’15 recently embraced his artistic side while in Denmark. Studying at the Danish Institute of Study Abroad (DIS) for the spring semester, he decided to enroll in a foundational graphic design course within the DIS’s highly regarded Architecture and Design Department. “As president of VTV (Villanova’s television station), I have been exposed to a lot of the visual media industries and gained an extracurricular interest in graphic design,” he explains. What he didn’t know when he began, is just how naturally design would come to him.

According to Department Director Henning Thomsen, “David had great success in the course, and the faculty was super impressed with his skills.” In fact, his work was so strong that David received the Institute’s Academic Award for Graphic Design. “I didn’t expect such a good review from the critique professors on my last assignment,” he confesses.

Does having discovered his talents in graphic design change David’s education and career trajectory? “No,” he answers. “I have always known I wanted to be an engineer, and being on the Solid Mechanics and Design track at Villanova will allow me to pursue product and design engineering, which will be great fields in which to incorporate my creativity.”

This summer, David looks forward to working as a Product Engineering intern with Northrup Grumman in their Space Systems branch in Redondo Beach, California. He also is eager to work with the Naval Surface Warfare Center in Philadelphia (NAVSEA) on his senior capstone design project next year.