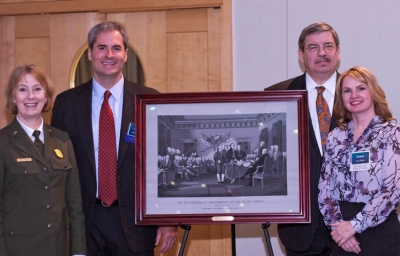 Villanova University College of Engineering alumnus Thomas Caramanico ’71 CE, ’83 MSCE, was honored on October 30th with the Friends of Independence National Historical Park’s Founder’s Award. A 13-year governing board member of the Philadelphia organization, Caramanico was recognized for his outstanding leadership, loyalty and support.

The Friends of Independence National Historical Park works to directly promote the scientific, educational and historical activities of Independence National Historical Park (INHP), which is  part of the National Park Service. Under Caramanico’s leadership, the organization has raised funds for important projects, hosted large-scale social events to promote INHP, and funded free programs for visitors and students. The organization lauded Caramanico as “the Ben Franklin of our time,” and honored him as only the second recipient of the Founder’s Award in over 40 years.

Caramanico served as president of McCormick Taylor Inc. from 1998 through 2013. Outside of his career, his life has been dedicated to igniting change in the world through his philanthropy. Drosdick Endowed Dean of the College of Engineering, Gary A. Gabriele, credits Caramanico for serving as a strong role model for current students. “Tom has had a successful career while also cultivating a lifelong commitment to the community through service to others.” Apart from his work with INHP, he and his wife Anne established the Caramanico Foundation, which promotes quality education in schools in rural Cambodia. Founded in 2006, the foundation supports schools for children of all ages, providing access to education for more than 700 students. Through the Anne M. and Thomas A. Caramanico Endowed Service Learning Fund, Villanova engineering students have had the opportunity to travel to Cambodia where they have worked on the design and development of new school buildings, with a focus on sustainability.

An active member of the community, Caramanico serves on the boards of five additional non-profit organizations, including the Catholic Community Choir of Philadelphia, Freire Charter School, Friends School Haverford, the National Liberty Museum and the Independence Visitor Center. “Tom’s career and service to the community, both locally and globally,” says Dean Gabriele, “embodies the values that we embrace at Villanova.”