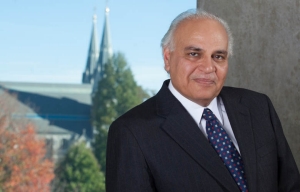 Moeness Amin, PhD, director of the Center for Advanced Communications (CAC) at Villanova University, has been honored with the 2014 IEEE Signal Processing Society Technical Achievement Award. This international prize is presented to a person who, over a period of years, has made outstanding technical contributions to theory and/or practice in technical areas within the scope of the Society, as demonstrated by publications, patents, or impact on the field. In naming him one of this year’s two recipients, Awards Board Chair José Moura cited Dr. Amin’s “fundamental contributions to signal processing algorithms for communications, satellite navigations, and radar imaging.”

Dr. Amin expressed his joy and appreciation for this level of professional recognition: “This is the highest honor and most prestigious award that I have received in my career. It speaks volumes to the CAC’s efforts in advancing research and technology in the broad area of signal processing. I would like to thank all CAC students, faculty and staff for their hard work and for helping me achieving this recognition!”

Gary A. Gabriele, PhD, Drosdick Endowed Dean of Engineering, lauded Dr. Amin’s accomplishments: “It is a credit to all the effort, long nights, long flights, long meetings, and hard work Dr. Amin has put into the CAC, and to the many contributions of the faculty, researchers, students, and staff. We are all very proud!” Rev. Kail C. Ellis, OSA, PhD, Villanova University Vice President for Academic Affairs, added, “Dr. Amin has worked hard and achieved much. He is a great example to our younger faculty.”

As Villanova transitions to a doctoral/research university classification, this award is evidence of the highest caliber of work that already is taking place in the College of Engineering. Dr. Amin explains: “Typically bestowed upon those from the world’s top research institutions —from MIT, Stanford and Princeton, to École Polytechnique Fédérale de Lausanne and the University of Cambridge—this award confirms that Villanova faculty can achieve in research and professional recognition, as much as, and even more than, their colleagues in leading research universities.”

The IEEE Signal Processing Society Technical Achievement Award is the third achievement award bestowed on Dr. Amin. He received, in 2009, the Individual Technical Achievement Award from the European Association of Signal Processing, and in 2010, NATO’s Scientific Achievement Award. Among several other notable awards that Dr. Amin has received in his distinguished career are the IEEE Third Millennium Medal in 2000 and the Chief of Naval Research Challenge Award in 2010. Dr. Amin also has been recognized as a Fellow of the Institute of Engineering and Technology, the International Society of Optical Engineering, and the Institute of Electrical and Electronics Engineers (IEEE). He has more than 700 journal and conference publications, has authored or co-authored 18 book chapters, and is the editor of Through the Wall Radar Imaging (2011) and Compressive Sensing for Urban Radar (2014). Additionally, Dr. Amin is the recipient of eight paper awards and holds two U.S. patents on smart antennas.

Signal Processing Society President Alex Acero will present Dr. Amin with the Technical Achievement Award during the 2015 International Conference on Acoustics, Speech and Signal Processing in April 2015 in Brisbane, Australia.