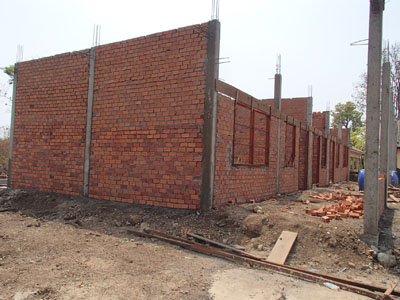 Former structural engineering capstone team members and 2013 graduates Fernando Rabell and Sean Muirhead, along with their then-teammates, current Civil Engineering graduate students Joaquin Iglesias ’13, Patrick McAlpine ’13 and James Matzke ’13, were selected as one of three finalist teams in the 2014 SEI (Structural Engineering Institute) Student Structural Design Competition. Their winning design was the basis of a newly constructed preschool in Cambodia that integrates the need for early education and health and hygiene into the building design.

The project developed during summer 2012 when Rabell traveled to Cambodia with fellow engineering students and Director of Engineering Service Learning Jordan Ermilio ME ’98, MSWRE ’06. Much of their time on that trip was spent at the Caramanico School in Trapaing Chres, Ratanakiri, Cambodia, which was built by Anne and Thomas Caramanico PE, CE ’71, MSCE ’83. Inspired by his experience, Fernando adopted the community’s proposal for a pre-school building as the focus of his senior capstone, and invited Iglesias, Matzke, McAlpine and Muirhead to join him on the project.  Working closely with the Caramanico Foundation, the team researched local design requirements such as wind speeds, soil and water quality in order to create an approved design for the school.

In December 2013, Iglesias, McAlpine and Ermilio returned to Cambodia to meet with the in-country contractor, zone the site and break ground. The new building will provide a safe and healthy learning environment for more than 80 children.

The Structural Engineering team was recognized at the SEI/American Society of Civil Engineers Awards Lunch at Structures Congress in Boston, Mass. in April, where they presented their project before a panel of judges. The Villanova team came in 2nd place, earning them a $500 award. 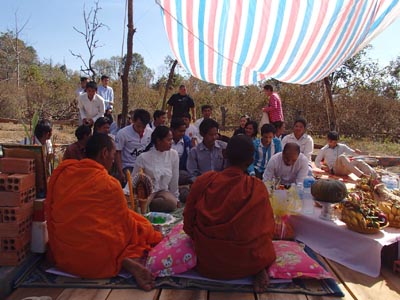 A Buddhist groundbreaking celebration offers flowers, fruit and other foods to the spirit of the construction location. Afterward, these gifts are given to the construction workers, members of the school committee, and teachers. The people who eat the food will “get best wishes because they eat food blessed by the God.”