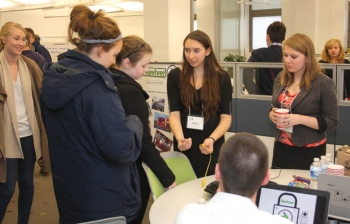 How much can you really accomplish in 24 hours? The weekend of November 15–16, a group of students from across Villanova University sought to find out. The third annual Imagination Quest Weekend began on Saturday at 1:00 p.m. and culminated with a shark-tank style business pitch in the “Cat Cage” on Sunday at 1:00 p.m.

Participating students from the College of Engineering, the School of Business, the College of Liberal Arts and Sciences, and six students from the University of New Haven were sorted into interdisciplinary teams before visiting different locations throughout campus to brainstorm. After observing various spots on campus and developing ideas for potential products or services, students presented their ideas to judges who acted as mentors, providing feedback on the groups’ ideas. Based on input and guidance from the judges, students then chose one of their ideas to develop throughout the rest of the weekend.

The groups dedicated the remainder of Saturday afternoon to thinking, planning and advancing their ideas. On Saturday evening, each group delivered an “elevator pitch,” presenting their new ideas to the judges in a concise way. The pitches took place during an actual elevator ride, limiting students to the length of time spent on the elevator to inform the judges of their new product or idea. 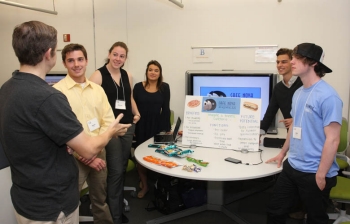 Sunday morning was spent building and perfecting their prototype in time for a trade show, where students marketed their idea for other students, friends and faculty. Groups received points based on how many people they encouraged to attend the trade show. For the final presentation of their idea, students again met with judges, this time in the “Cat Cage,” Villanova’s own version of the “Shark Tank.” There, student groups presented their polished business pitches to the expert panel, a group of faculty and alumni with experience in entrepreneurship and business. The panel tested the students with tough and demanding questions. The groups, however, remained poised and confident in their entrepreneurial proposals.

The winning group, Team “Excellent Endeavors,” earned $600 for their idea, “Reviver,” a public phone charger shaped like a frame that constricts to the appropriate amount of pressure so that your phone is secure until you release your phone with a swipe of your credit card. “Excellent Endeavors” team members were Brittany Ghicondey ’16 ChE, Thomas Iervolino ’15 ChE, Shant Marootian ’16 EE, Kaitlin Waller ’17 VSB and a student from the University of New Haven. Second place winners, Team “Born to Innovate,” made up of Miguel Corte-Real ’17 CLAS, Elise Keale ’16 CE, Hannah Lee ’17 ME and Jason Tavoletti ’16 ChE, were awarded $300 for their “Café Nova Express” idea, a mobile app where students can pre-order food from Café Nova. The third place prize of $150 went to “The Creators,” Abigail Buckenheimer ’16 ME, Marissa Cucinotta ’15 ME, Michael Florio ’16 EE, David Kelley ’16 ChE, and Caroline Franchino ’16 ME for their “Rest Up” idea. 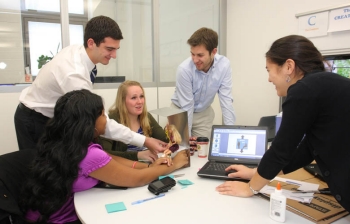 Team “Creators” took third prize for its “Rest Up” idea.

Now in its third year, the Imagination Quest Weekend has undergone some changes since its inception in 2011. Amanda Kelly, program coordinator for the Kern Entrepreneurship program, explained that the event has incorporated a few new aspects this year, while still remaining true to its founding mission of promoting creativity and imagination. This year, the tradeshow included a logo competition and a social media aspect, where participants received points for sharing news, pictures and highlights from the event on Facebook, Twitter and Instagram.

Originally an event exclusively for engineering students, the Imagination Quest Weekend now invites students from across all of Villanova’s schools and colleges to participate. This interdisciplinary focus ties in well with the mission of the ICE Center, one of the event’s sponsors.

“Our reach since the Center was formed has always been cross-campus,” says II Luscri, director of the ICE Center. “The majority of our students actually come from outside of the business school. We are particularly interested in students from outside of your conventional entrepreneurial disciplines getting involved and engaged.”

Although this year the School of Nursing was not represented at the Imagination Quest Weekend, last year’s event included students from all four undergraduate schools and colleges, something that all of the event coordinators see as a goal of the weekend.

James Klingler, professor in the Villanova School of Business and faculty director of the ICE Center, served as a mentor and judge at this year’s event. He believes that the relatively unstructured format of the event, along with its interdisciplinary nature, makes the event successful and encourages students to think entrepreneurially.

“We don’t constrain them very much,” Klingler says. “Entrepreneurship isn’t structured. There is no map. If there was a map, we would all be there. The idea is to get everyone using the powers of observation and coming up with ideas, and then learning to articulate them.”

The Imagination Quest Weekend encourages students to think creatively and entrepreneurially under tight time constraints. So far, the results have been pretty remarkable.

“It’s really fast-paced and it’s impressive how much the students do in 24-hours,” Kelly says. “Most of them come here without an idea. They start completely from scratch, and by the end they’ve gotten all the way to making a prototype and having a business plan. It’s really pretty amazing.”