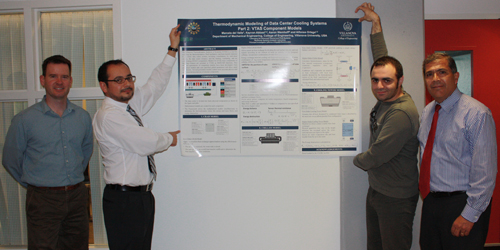 A team of Villanova faculty and students earned the award for Best Poster at the April 2013 meeting of the Industry/University Cooperative Research Center (I/UCRC) in Energy-Smart Electronic Systems (ES2) in Atlanta. The poster, entitled “Thermodynamic Modeling of Data Center Cooling Systems, Part 2: VTAS Component Models,” describes work in developing computational models of cooling system equipment used to remove heat from data centers. These models have been implemented into a computational framework called the Villanova Thermodynamic Analysis of Systems (VTAS), which acts as a tool that enables users to analyze the thermodynamic efficiency of data center cooling systems.

The poster team includes engineering PhD student Marcelo del Valle, mechanical engineering graduate student Kayvan Abbasi, Assistant Professor of Mechanical Engineering Dr. Aaron Wemhoff, and Associate Vice President for Research and Graduate Programs and James R. Birle Professor of Energy Technology, Dr. Alfonso Ortega. During the meeting, Marcelo del Valle presented the poster to several prominent judges from the IT industry. The Villanova team’s work was named the best out of 21 submissions. This poster award marks the second win in a row for Villanova researchers at the ES2 meetings; Ian Dardani ’13 ME won the award at the October 2012 meeting in Arlington, Texas.

ES2 is a research center funded by the National Science Foundation (NSF) and member companies. The center features collaboration between Villanova and three other universities: Binghamton University, the University of Texas at Arlington and Georgia Tech. Dr. Ortega is director of the Villanova site. Initiated in 2011, ES2 has more than 20 industrial partners and has produced 15 journal and conference publications in the past year.