Several College of Engineering alumni made their mark in Washington D.C. this past fall. In a ceremony before the full bench, Patrick Keane BSEE ’82, Robin Loporchio BSEE ’89 and William (Bill) Midon BSME ’75 were admitted to the U.S. Supreme Court. An attorney wishing to practice before the Supreme Court must apply to do so, must be admitted to the bar of the highest court of a state, must be sponsored by two attorneys already admitted to the Supreme Court bar, and must take either a spoken or written oath. Engineering alumnus Rich Avil ’70 officially presented the names of those Villanova alumni to be admitted before Chief Justice John Roberts, and afterward hosted lunch for the group at his D.C. law firm, Jones Day.

William M. Brown BSME ’84, MSME ’87 is another Villanova engineering graduate whose expertise was tapped by our nation’s capital when President Obama appointed him as a member of the National Security Telecommunications Advisory Committee. Brown is the president and CEO of Harris Corporation, an international communications and information technology company based in Melbourne, Florida. He also is a member of the College of Engineering advisory board. 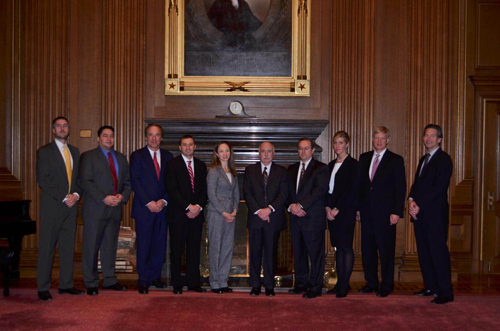