Villanova-FAU Team to Represent the U.S. in International Robotics Competition 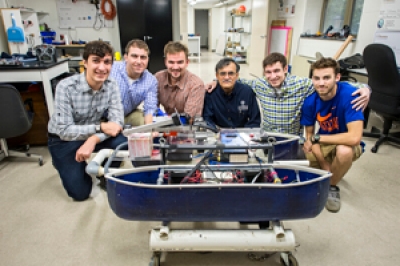 Villanova University’s Department of Mechanical Engineering, in partnership with Florida Atlantic University (FAU), has been selected as one of three teams of students to represent the United States in the inaugural Maritime RobotX Challenge competition in Marina Bay, Singapore, October 20-26, 2014. The selected teams — approximately 15 total from the United States, Singapore, Australia, South Korea and Japan — will receive a Wave Adaptive Modular Vessel (WAM-V) for use in the competition, and a grant of $25,000.

Sponsored by the U.S. Office of Naval Research (ONR) and run by the Association for Unmanned Vehicles Systems International (AUVSI) Foundation, the RobotX Challenge will require teams to outfit the WAM-V standardized vessels with sensors, computers and software. During competition, the vehicles will attempt to complete courses based on a variety of maritime surface vehicle missions. According to its website, RobotX has two primary objectives: 1) Create a pinnacle STEM student outreach event and, 2) Promote interest among Pacific national partners in the science and technology of autonomous systems. More specifically, ONR and AUVSI hope to “stimulate innovative approaches to autonomous sensing, on-board decision-making and mission implementation.”

With a proposal described by AUVSI Foundation Executive Director Daryl Davidson as “the highest caliber,” Villanova and FAU distinguished themselves among the strongest engineering programs in the country. “Your particular approach to autonomy, systems integration, marshaling resources and technical support was one of the best submitted from an impressive list of universities,” says Davidson. Also representing the U.S. in the competition are MIT-Olin College and Embry-Riddle Aeronautical University.

Leading Villanova’s work on the RobotX project is Dr. C. ‘Nat’ Nataraj, professor and chair, Department of Mechanical Engineering, and the Mr. and Mrs. Robert F. Moritz Sr. Chair in Engineered Systems. He explains that the University entered the competition with FAU after realizing their complementary strengths: “We became acquainted with Florida Atlantic’s team, including adviser Dr. Karl von Ellenrieder, at the annual International Roboboat Competitions. We discovered we each had areas of expertise that would prove valuable in the RobotX Challenge.” FAU’s Department of Ocean Engineering and the school’s proximity to the ocean provide a natural advantage. FAU will house the WAM-V and contribute to its systems engineering and low-level control. For its part, the autonomy experts at Villanova will manage high-level control, vision-based navigation, localization and mapping. The Villanova team will develop technology based on a 4-foot WAM-V prototype, and make a number of trips to FAU over the next several months in order to apply the algorithms and technology to the actual boat.

Dr. Nataraj believes the Villanova Autonomous Surface Vehicle Team’s (ASV) history of success in the Roboboat Competition is one of the primary reasons the University was selected for the RobotX Challenge. “I see Roboboat as a precursor to RobotX and we have a solid reputation in that competition,” he says. Dr. Nataraj points out that the experience from those competitions will provide Villanova and FAU with an edge: “You learn which pieces of the project are difficult, which are simpler and which are critical. You begin to understand the importance of systems engineering and the role of various factors like disturbances and uncertainties.” Given the connection between Roboboat and RobotX, three ASV members will work on this new project. Graduate research assistant Anderson Lebbad ’12 ME and Mechanical Engineering juniors Dylan DeGaetano and Edward Zhu will be joined by at least one more graduate student and two or three additional undergraduates. Dr. Garrett Clayton, assistant professor, along with his graduate student John 'Wes' Anderson, and Dr. Hashem Ashrafiuon, professor and director of the Center for Nonlinear Dynamics and Control, will also provide expert advice in the areas of Lidar-based navigation and robust control. With its current budget, five team members, including Dr. Nataraj, will represent Villanova in Singapore next October.

On the subject of finances, Dr. Nataraj notes that corporate support is an important aspect of this competition. “About 15 companies have offered technical and/or financial assistance. That support makes this whole experience possible,” he says. Proud members of Villanova’s Engineering Alumni Society look forward to contributing toward travel costs and related expenses. Others that have pledged their support include:

Companies and organizations that wish to become involved should contact Keith Argue, assistant dean of External Relations for Villanova’s College of Engineering, at keith.argue@villanova.edu or 610-519-5024.

“It is incredibly gratifying to be selected for this experience, and I am confident that our team will do well,” says Dr. Nataraj. He is also excited about the research that it will encourage. “We’re in new territory here with very advanced technology. Developing this level of autonomy in a boat is something that’s never been done before.”

To learn more about the RobotX competition, including the mission tasks presented to each team, visit www.robotx.org.