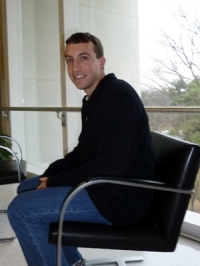 Since spring 2012, which was only his second semester at Villanova, Joseph has been conducting research on the conversion of biomass to biofuels with Dr. Justinus Satrio, assistant professor of Chemical Engineering. Working in the College’s Biomass Resources and Conversion Technologies (BRCT) laboratory, he has been studying the thermochemical conversion of two waste biomasses: Paper mill sludge, a byproduct of paper-making, and Phragmites Australis, also known as Common Reed Grass, an invasive plant that grows in wetlands worldwide, including those on Villanova’s west campus. For his project, Joseph evaluated the use of pretreatments to alter the biomass in order to obtain similar biofuel products, along with a usable bio-char to utilize the wasted energy from the disposal of the feedstocks. From the work on paper mill sludge, a manuscript, with Joseph as the first author, has been prepared for submission to Bioresource Technologies Journal.

A senior Chemical Engineering major with a minor in Entrepreneurship, Joseph was a featured undergraduate in the College's Annual Review 2011-2012. His past honors include a second place award in last spring's Sigma Xi Research Poster Symposium, as well as a third place team win in the 2013 Villanova Student Entrepreneurship Competition. Joseph serves as president of the Villanova AIChE Student Chapter and the VU Chem-E Car Program. He spent this past summer as an intern at Proctor & Gamble. "I feel honored to have my research recognized on a national level at one of the most prestigious events for undergraduate engineering students," says Joseph.

Dr. Satrio has nothing but praise for this impressive undergraduate: "I am fortunate to have Joe working in my research lab. He is an exemplary student who maintains a very rigorous and demanding schedule, which includes taking four or five courses each semester, performing research in my laboratory, volunteering in various student organizations, and holding a part-time job. Despite his workload, Joe maintains close to a 4.0 GPA.  He will be successful in whatever career he decides to pursue."