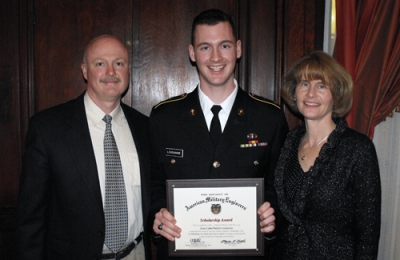 “I feel honored that I was considered and bestowed the award. It’s really assuring to know that groups like the Society of American Military Engineers exist and care about the future of the field,” says Loughnane.

Receiving this award is no easy task for an engineering student with ROTC commitments. David Johnson, new Assistant Professor of Military Science at Villanova explains the challenges. “In addition to their regular coursework, cadets are required to participate in physical fitness training at least three times a week. Juniors and seniors are assigned different leadership positions throughout the semester and are required to teach a lab and lead physical training sessions for which they are evaluated. Cadets must also attend at least three multi-day, out-of-state field training exercises each year,” he explains. When asked how he manages the demands of both his academics and ROTC, Loughnane admits, “I drink lots of coffee and have a good planner!” On a serious note he adds, “Getting into a routine, prioritizing effectively and asking for help when needed are three ways I manage to do both.”

Students are chosen for the SMART scholarship based on their engineering GPA, ROTC GPA, physical fitness score and extracurricular activities. Once nominated, cadets are then compared to other ROTC students in the Philadelphia area. Having worked with the ROTC programs at Temple and Princeton Universities since 2001, Johnson has been pleased with the cadets at Villanova. “They continue to impress me with the quality of their work and their motivation to meet and exceed standards. I can say without a doubt the Villanova cadets are head and shoulders above their peers at other schools,” he says.

This summer, Loughnane will complete the 29-day Leadership Development and Assessment Course in Fort Lewis, Wash. where he will be graded against all cadets in the nation for placement after graduation. The remainder of his summer will be spent interning for the National Ground Intelligence Center in Charlottesville, Va.  “I was able to get the internship through ROTC and I am very excited for it,” says Loughnane. He adds, “After I graduate I hope to go active duty. My branches of choice are engineering, signal core and military intelligence.”