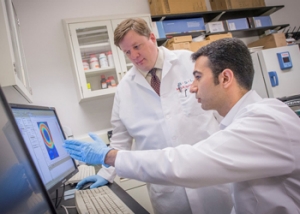 Dr. Jens Karlsson with a member of his Villanova research team.

In the medical community, attempts to cryopreserve tissues and organs to be used for transplantation have been stymied because cells within tissue are highly susceptible to damage from ice formation. For more than a decade, Jens Karlsson, PhD, associate professor of Mechanical Engineering at Villanova University, has pursued research on strategies for overcoming obstacles to cryopreservation of organs and tissues. On November 5, 2013, he and Adam Z. Higgins, PhD, School of Chemical, Biological and Environmental Engineering, Oregon State University, had their groundbreaking findings published in Biophysical Journal, a leading publication in the area of biophysics. Their study, titled "Effects of Intercellular Junction Protein Expression on Intracellular Ice Formation in Mouse Insulinoma Cells," is featured on the journal's cover and is the only paper, from among the 30 published in this issue, to receive the designation "New and Notable."

Dr. Karlsson's work on tissue cryopreservation began in 1999 when he received a National Science Foundation (NSF) CAREER Award. The research which led to the current findings was funded in part by a later NSF grant titled "Kinetics of Intracellular Ice Formation during Cryopreservation of Tissue Engineered Constructs." By combining sophisticated high-speed videography and mathematical modeling techniques, Dr. Karlsson and his team have discovered exactly how ice crystals invade different types of tissue cells during the freezing process – a significant discovery that could pave the way for new cryopreservation techniques that involve blocking ice from entering cell pathways or diverting ice so that it grows in other directions. "If you can cryopreserve tissues or even organs, then you have a way of storing them and of transporting them, providing much-needed valuable time for transplantation," explains Dr. Karlsson.

In her review of the work, appearing in Biophysical Journal's "New and Notable" section, noted thermodynamicist Janet A. W. Elliott, PhD, Canada Research Chair of Thermodynamics, writes that Drs. Karlsson's and Higgins's findings provide a critical piece in the puzzle of intracellular ice formation. Most important, she explains, is "the unexpected result that junction-lacking cells freeze at higher temperatures than the wild-type cells." Dr. Elliott describes the results as "convincing yet entirely unexpected." Other respected cryobiology researchers were equally impressed. "[The work] has important implications in explaining ice formation and the ensuing injury in tissues, a poorly understood phenomenon in cryobiology and regenerative medicine research," says John Bischof, PhD, Distinguished McKnight University Professor, and Carl and Janet Kuhrmeyer Chair in Mechanical Engineering, University of Minnesota. Peter Mazur, University of Tennessee, Knoxville, stated simply, "It is an important paper."

Drs. Karlsson's and Higgins's unexpected findings have generated considerable interest from the national media. In addition to prominent placement in Biophysical Journal, related articles have been published by The Scientist Magazine ("Faulty Freezing") and Fox News Health ("Closer to cryopreservation: New findings could overcome obstacles to freezing human tissues"). KTRH in Houston aired an interview with Dr. Karlsson during its news broadcast on November 7, 2013. Also carrying the story were respected scientific news sites including Phys.org and ScienceDaily.com.

When asked what comes next in his research, Dr. Karlsson explains that his team is "working on better understanding these processes, so that we can ultimately develop computer models that will aid with the design of effective cryopreservation techniques, as well best practices for transporting and storing tissue-engineered medical products."

For now, Dr. Karlsson is taking some time to reflect on the recognition for his team’s achievements: "We are humbled and grateful for the accolades that our work has received. The attention that has been brought to one of the many high-quality research projects ongoing at Villanova is a clear sign that the University is on an accelerating trajectory towards national recognition as a preeminent institution of learning and research."

Dr. Karlsson’s research findings are illustrated on the front cover of Biophysical Journal.