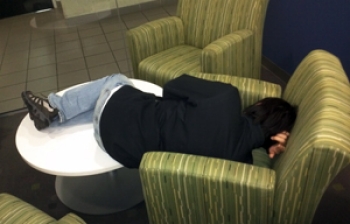 On November 9-10, Villanova University College of Engineering hosted its first 24-hour Android Hackathon. Popular on college campuses nationwide, Techopedia.com defines a hackathon as “a gathering where programmers collaboratively code in an extreme manner over a short period of time.” Created and organized by Electrical and Computer Engineering Adjunct Professor EJ Dougherty III, Villanova’s Hackathon was designed as a fun and competitive event outside of the classroom where students could apply their technical and creative skills in a fast-paced, team-oriented environment.  The only requirements were an awesome app idea, a little Android coding know-how, and the energy level to make an app a reality in one weekend.

Around noon on Saturday, more than 30 students from three local colleges—Villanova, LaSalle and Swarthmore— gathered in Villanova’s Center of Engineering Education and Research to form teams, pitch app ideas and draft project descriptions. On Sunday, after many students pulled all-nighters, projects were finalized and presented to a panel of academic and industry judges.  Final Android mobile apps developed during the Hackathon included: A search for on-line streaming videos; an app to improve the efficiency of the restaurant ordering process; a student textbook exchange and auction; and an app to search satellite radio playlist history.

In addition to the College of Engineering, the ICE Center (Villanova’s Center for Innovation, Creativity and Entrepreneurship), Villanova School of Business, LaSalle University and engineers from Verizon Wireless all actively participated in the event.  The Verizon Wireless team of mobile industry experts worked closely with each of the teams throughout the weekend. Ji Hoon Kim, one of the company’s engineers, enjoyed seeing students engage both their creative and technical sides: “They had some really interesting ideas and I was impressed with how they planned their apps prior to coding. The students also managed to maintain their enthusiasm, even when they ran into problems.”

Verizon Wireless sponsored one of the Hackathon’s awards, which was presented to Villanova Computer Engineering majors Ed Condon ’15, Matt Wiedmeier ’15, Alex Wright ’15 and Jim Harris ’14 for their NFC (Near Field Communication)-enabled restaurant ordering app. Comcast Interactive Media also sponsored an award, which went to Will Kapcio ’14 EE, Ben Mix ’14 CpE, Will Gunn ’14 CpE, Brian Nevinsky ’14 CPE and Gin Siu Cheng ’15 CpE for an on-line video search app. Other Hackathon sponsors included Lockheed Martin; AT&T Mobility, which provided some of event’s cool giveaways; and the Mid-Atlantic chapter of Mobile Monday, a global community of wireless industry professionals. “I did not anticipate the level of support we received from the industry sponsors,” says Dougherty. “They provided financial support, Android development devices and giveaways.  And they also worked closely with each student team.  Having industry savvy technology experts interact with students during the event was a priceless opportunity.”

Everyone involved agreed that the Android Hackathon was a tremendous, albeit demanding, experience. Students were overheard saying “I'm exhausted, but man, this is fun.” “I’ve learned so much.” And, “Now, I know this is what I want to do with my life."  With all it has to offer, Dougherty expects the Hackathon to become an annual event: “For students to discover that they can collaboratively generate usable solutions, quickly learn new technologies, and deliver against a tight deadline empowers them with tremendous strength and confidence.” Dougherty adds, “The issues that many of the teams encountered and overcame in that 24-hour period are similar to those they will face in the development projects later in their professional careers.” 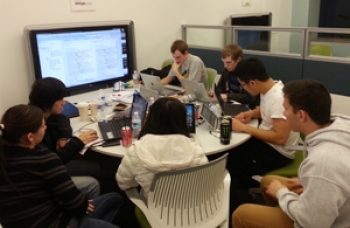