Alberto Alemán Zubieta, CEO of the Panama Canal Authority, made a special presentation to students, faculty, and members of the Villanova community as part of the Patrick J. Cunningham, Jr. and Susan Ward ’80 Endowed Lecture Series on March 30. Alemán was joined by a delegation from Panama, including Mario Jaramillo, Ambassador of the Republic of Panama, and a number of members of the Villanova University Alumni Panama Chapter, including Aurelio Barria VSB '73, William Herron ME '73, Rolando Perez VSB '76, and Roberto Mendez VSB '76.

"It was a very special event for all of us here at Villanova. As CEO of the Panama Canal Authority, Mr. Alemán is a key international figure and, through his efforts and the expanding capabilities of the new and improving Panama Canal, he’s substantially helping his nation continue to play a major and unique role in the ever-expanding world of international transportation," says Frank Falcone, PE, Adjunct Associate Professor of Civil and Environmental Engineering, who was instrumental in bringing Mr. Alemán to campus.

Alemán has been at the helm of the Canal for 16 years, serving in several leadership positions. During this time, the Panama Canal has become a world leader in services to the maritime industry and a cornerstone of the global transportation system. Since control of the Canal transferred to Panama in 1999, approximately 14,000 ships pass through each year, paying an average of toll of $200,000, which supports national initiatives.

As the CEO of the Panama Canal Authority, Alemán oversees the $5.25 billion Panama Canal Expansion Project, which will have a significant impact on world maritime commerce. The scope of the project includes goals to make the Canal both wider and deeper to accommodate advancements in the shipping industry, while ensuring that it continues to serve as a source of national pride, generating billions of dollars in revenue.

The expansion includes the construction of two new sets of locks—one each on the Pacific and Atlantic ocean sides of the Canal; the widening and deepening of existing navigational channels; and four dry excavation projects that will open a new, nearly four-mile-long (6.1 km) access channel to connect the Pacific locks to the Culebra Cut.

In addition to reviewing the processes involved with launching, managing, and completing a global project of such magnitude, Alemán fielded questions from William Angiolillo CE '12 and Ian Dardani ME '13, who each have extensive experience with service engineering in Panama and kicked off the question-and-answer portion of the event. Click here to watch a video of the presentation.

The College of Engineering has a longstanding relationship with the people of Panama, including a new initiative to develop a water resources master plan for the growing region outside Panama City and annual service-learning trips in support of Fr. Wally Kasuboski’s Chepo/Bayano mission. The Patrick J. Cunningham Jr. and Susan Ward ’80 Endowed Lecture Series in Engineering connects Villanova engineering students with engineering professionals from unique backgrounds. 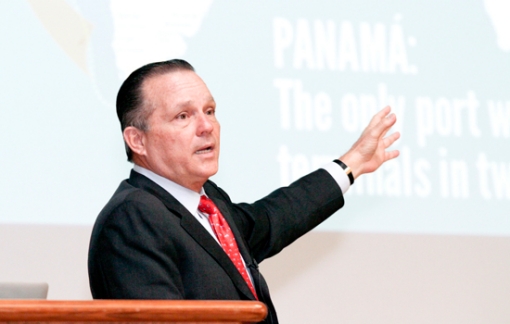