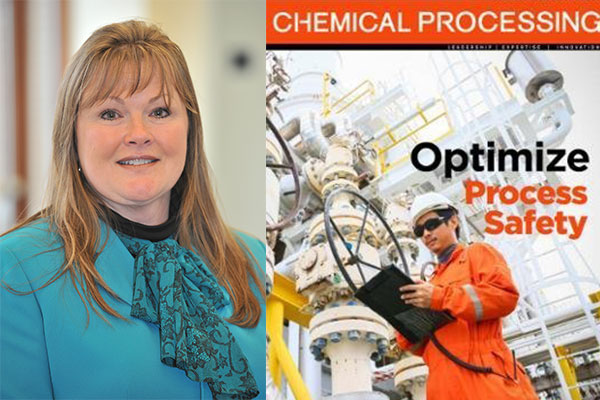 Q: How did you first get introduced to process safety?

A:  My first “exposure” to process safety came when I was only 9 years old. I lived less than a mile from a site that produced chlorinated dry bleach for pool chemicals and other uses. This is what I remember.

On June 24th, 1968, I was playing in our front yard and heard sirens from across the river. It was a quiet, still evening. I watched as a plume of greenish yellow smoke went almost straight up into the air and listened to the plant sirens. Within a very short period, I heard a police siren and two West Virginia State Troopers drove into our neighborhood. With a megaphone they called out, “This is an Emergency. You must evacuate your homes and leave the area immediately.” We were told that one of the plants had a fire and for our safety we had to leave. We went 30 miles away to stay for the night. The next morning, we were able to go home.

What we learned is that we were not the only ones that were evacuated. There were about 15,000 “near neighbors” evacuated and over 200 people sought medical treatment (according to the local newspaper archives ‐ June 1968). As the days went by those numbers grew, so I am not sure what the final count was. Upon returning, our grass was bleached, and the trees were partly defoliated. So, this event was the first to make me question the interrelationship between chemical plants and neighbors, both from an employment perspective and a safety perspective.

Q: What has been your career path?

A: I finished my undergraduate degree in Chemical Engineering and accepted a job as a Process Engineer in Deer Park, TX, in 1981. My first “real” engineering project was to complete the documentation and installation of a Statistical Analysis for Emergency Response (SAFER) System. It was awesome. Based on preprogrammed information, this system would model the release size and direction of material from any ammonia, HCl or chlorine pipeline or piece of equipment on the site.

The catch was that the calculations, for each pipeline for multiple hole sizes and multiple pressures had to be performed by hand. NO PERSONAL COMPUTERS. In addition to the thousands of calculations, all the Piping and Instrumentation Diagrams (P&IDs) had to be verified and updated so that we had the right information. ONLY then could we activate the system that was tied into a meteorological station that measured wind speed, wind direction, humidity, and atmospheric stability classes. I learned so much. It took over eight months to finish the line tracing, calculations and programming, but it was one of the most impactful projects of my career from a process safety standpoint – we finished in in mid‐year and by September 1984, it was operational and had accurately predicted several small leaks.

A month later, the PEMEX Explosion happened in Mexico City and a month after that the Bhopal toxic gas release. This was a wakeup call for me. It was the first time that I personally understood and accepted responsibility for the projects and engineering calculations that I had done, because now I understood what happened if design and installation were not done correctly – as planned ‐ and then maintained. That has stayed with me for my entire career. We have a great responsibility for what we do.

From this job, I went to work for an inorganic specialty chemical company and worked in design and plant start‐up, product development and had my first experience working in a tolling operation at Napp Chemicals in Lodi, NJ.

I went on to graduate school in Water Resources and Environmental Engineering at Villanova and worked for a consulting company in 1989 helping sites and companies prepare for the New Jersey Toxic Catastrophe Prevention Act. Later, I moved into Delaware and worked on the Extremely Hazardous Substances Risk Management Act. These were precursors to US OSHA 1910.119, Process Safety Management of Highly Hazardous Chemicals and US EPA Risk Management Plan Rule, 40 CFR Part 68.

Following the experience in NJ and DE, I stayed in consulting to start up a process safety organization and then formed my own company – LakeRidge Technology Group, Inc. – to work on process safety projects. One of my major clients was Bayer and after many projects, I started working for them directly.

While at Bayer, I was the Manager, Process Safety and Crisis Management, Director of HES, Security and Emergency Response at their largest site in North America and finished as the Director, Risk Management and Compliance for NAFTA for Bayer Material Sciences.

Since 2010, I have been with AIChE, and I am presently the Global Technical Director of the Center for Chemical Process Safety.