Providing Clean Water so “Man Could Have Life to the Full” 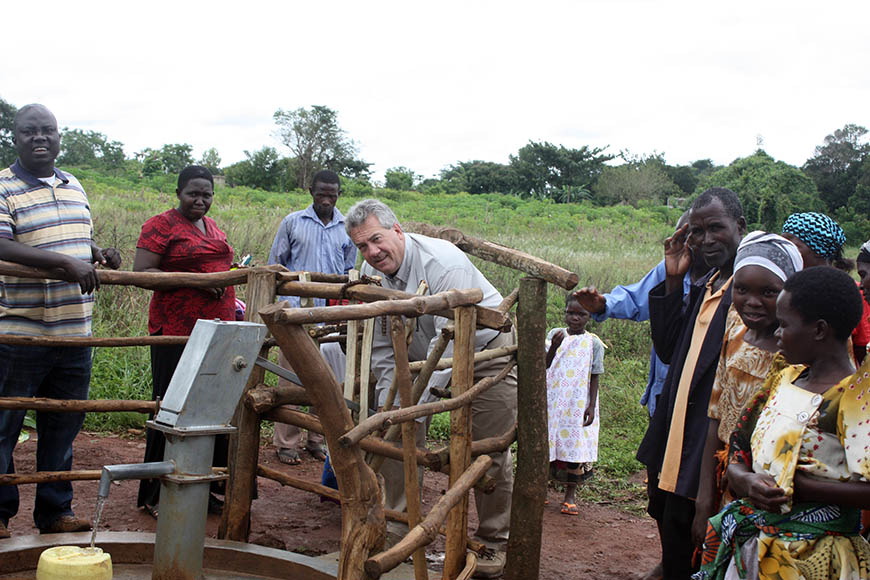 Seven years ago, Jim Mynaugh ’80 ChE was in India visiting one of his company’s engineering project sites. Driving through a small town he saw several teenage boys trying to bathe with water coming from a pipe in a hillside. “They had shorts on, and would laughingly pass a bar of soap back and forth. We were stopped there for a couple of minutes so I just watched them. Then, I realized they were bathing in sewage.” Mynaugh’s shock and horror accompanied him back to his five-star, gated hotel where his emotional response gave way to the realization that he was in a position to address the problem. The result was Divine Water, a non-profit with a goal to provide clean, safe drinking water to those without. To date, his organization has funded water projects in Haiti, Uganda and Costa Rica.

“We are not big—this year we will fund four to six wells,” says Mynaugh, “But each well provides clean water to more than 500 people, and it changes lives.” Perhaps the most immediate impact is with regard to human health. Community leaders in a Ugandan village told him that in the year since their well was installed, they had not had an outbreak of cholera, and dysentery rates had dropped from more than 50 percent to 1 to 2 percent. Mynaugh laughs to recall the story of one local doctor moving out of the village six months after the new well arrived. “Seems he could no longer earn enough money as people were no longer sick. We hope to install a well in his new village later this year and he hopes to have to move again!”

Using John 10:10 as its guiding Bible verse—"Jesus came so that man could have life to the full”—Divine Water uses 100 percent of donations to fund water projects. They pay no salaries, travel expenses or even postage. Mynaugh and his wife Kathy, along with their board members, cover all costs.

“Chemical Engineering department chair Dr. Bob White told us shortly before graduation, ‘If you aim at something, don’t miss,’” recalls Mynaugh. Perhaps that describes the guiding principle of this alumnus who’s committed to the life-changing power of clean water.