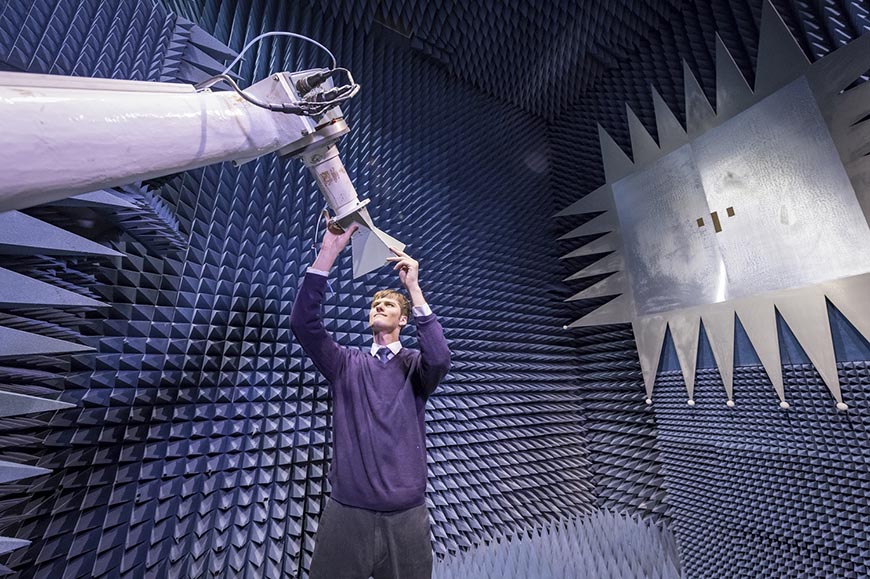 Many undergraduates start college with little to no idea of what they want to pursue academically. Then there are students like Christopher Israel, a second-year Electrical Engineering major with enough credits to qualify as a junior (with a 4.0 GPA), who has known since the eighth-grade that he wants to be an electronics engineer. More specifically, Chris fell in love with antennas and radio-frequency engineering. “I particularly like it because it merges many different aspects of engineering, where it’s almost as much materials science and mechanical engineering as it is electrical.” Fast forward six years, and this 20-year-old has parlayed his high school hobby into an impressive undergraduate research experience.

“In my first semester at Villanova I reached out to Dr. Ahmad Hoorfar, asking to see his lab (the Antenna Research Laboratory) and about potential opportunities to work with him. He encouraged me to apply for the Villanova Undergraduate Research Fellowship.” Chris’s VURF application was accepted and he spent this summer 2017 with Dr. Hoorfar researching “Three-dimensional Space-filling Curve Antennas.”

Chris was able to produce his novel antennas using the College’s 3-D printing technologies, which could then be validated and further analyzed for real-world performance through Villanova’s state-of-the-art facilities in the Antenna Research Lab. His end goal is having tests and measurements of multiple configurations of 3-D printed antennas to validate the simulation driven work that is largely already done. He plans to write a paper based on his work and submit it to an IEEE conference in the near future.