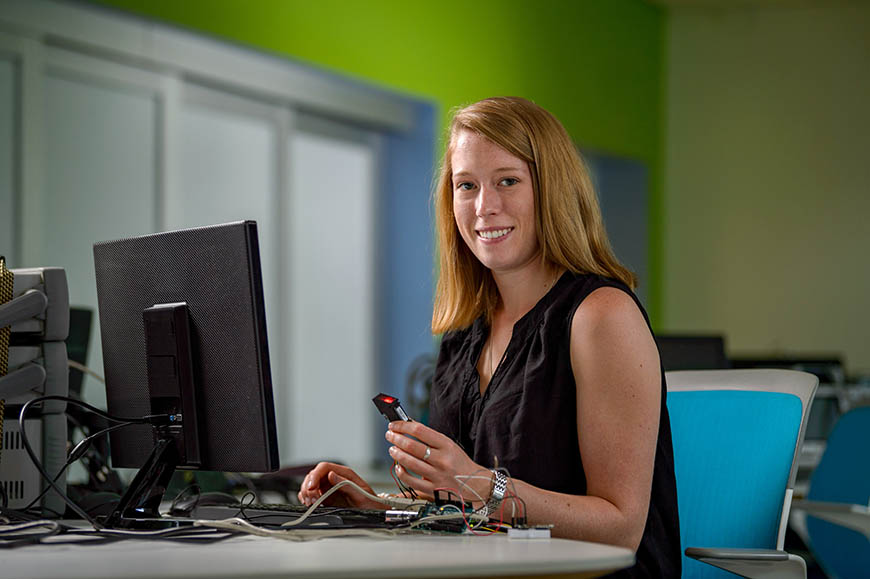 STEM Inspiration: According to a 2018 survey published by the Geena Davis Institute on Gender in Media, Gillian Anderson—Dr. Dana Scully on “The X-Files”—inspired real-life girls and women to pursue careers in STEM. Henderson can relate. Her inspiration to pursue a degree in computer engineering was Abby Sciuto, a forensic scientist on the CBS program “NCIS.” “I was particularly interested in her digital forensics expertise,” says Lauren.

The proposed solution: Combine high precision fingerprinting devices with a second form of security, significantly reducing the likelihood of a breach. “Two-factor authorization significantly reduces the likelihood of cyberattacks because obtaining a single factor like a fingerprint would be insufficient to break into a system; you would need both security factors,” Lauren explains.

The challenge: Identifying a single second verification method that would meet a set of criteria:

Solved: After researching and discarding the possibility of integrating a keyboard, a humidity sensor or a temperature sensor, Lauren’s conclusive solution was found in an LED pulse oximeter for detecting heart rate and oxygen saturation in the blood.

Next steps: Having addressed issues of software compatibility between the two factors, Lauren sees opportunities to extend her work into existing devices. Many smartphones, for example, already are equipped with fingerprinting sensors and LED pulse oximeters; her algorithms could be integrated to improve their security. “This project is just the start to a whole field of research, one that is increasingly being called upon as technologies grow and breaches in security and cyberattacks become more frequent.”

Today, Lauren is a program manager with Microsoft.