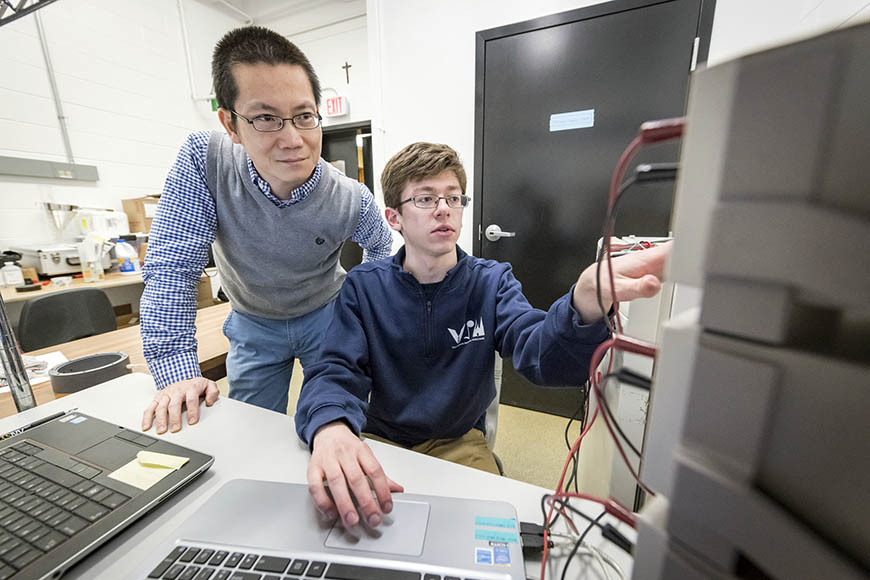 Microbial fuel cells convert chemical energy to electrical energy by the action of microorganisms. As such, they have been explored as a renewable source of power, ideal for remote areas where access to electricity is limited. While fundamental research in this field began in the late 1970s, little progress has been made in moving toward practical applications. Undergraduate Brendan Gorman ’19 ChE is working with Dr. Zuyi “Jacky” Huang, Associate Professor of Chemical Engineering and Director of the Biological and Environmental Systems Engineering Laboratory, to scale up the use of MFCs, particularly sediment microbial fuel cells. The University’s campus wetlands are serving as their living laboratory.

Goal: Develop an MFC to power a sensor and remove pollutants from stormwater in the wetlands.

How the Process Works: The anode is buried in sediment, which is rich in organic matter and exoelectrogenic microorganisms. The organic matter is oxidized by those organisms, sending electrons from the anode to the cathode, which lies in the water above the sediment.

Step 1: Determined that the wetlands would work as a source for the MFCs.

Step 2: Research the wetlands’ various soil compositions, noting that different soils consist of different organisms and vary in their ability to generate power.

Step 4: Combine MFC with a power management system (PMS) to accumulate energy for increased electrical output that can power sensors in remote areas.

Together, Dr. Huang’s group has successfully built the first generation of sediment microbial fuel cells at Villanova.  Future research will employ a computational fluid dynamics approach to scale up the size of the fuel cell in order to optimize the design and operation of large-scale microbial fuel cells and generate even more electricity.