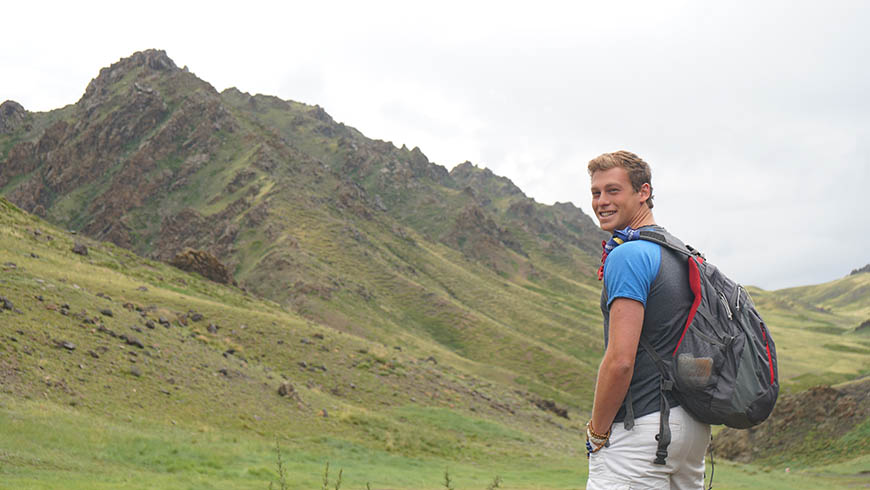 It’s not every day you meet an engineering student (now graduate) who’s also president of the University’s student body, as well as a “socially-aware” photographer. Chemical Engineering graduate Anthony Busa was/is all of those things and more. From September 2018-December 2018, his first public art exhibit, “Rural Mongolia and Tibet,” appeared in the Villanova Art Gallery. It included some 30 photographs that he took during two separate trips to Asia.

During an almost month-long trek through Tibet, Anthony visited several isolated Tibetan communities and Chinese towns while serving as an assistant and apprentice to the group’s guide, Chinese photographer, fine artist, and cultural exploration guide, Keren Su. The second trip, a National Geographic Expedition, gave him access to remote communities in Mongolia. He again served as a photographic assistant, carrying and caring for equipment while learning about field photography from some of the world’s best.

We asked Anthony a series of questions:

I’ve always had a love for tinkering, problem-solving, asking and determining “why” and then figuring out what other possibilities exist.

Growing up with digital film made it easy and inexpensive to take photos, as many as you want. Photography also allowed me to embrace my appreciation for nature, to capture the peacefulness and beauty of it.

My family was also a tremendous inspiration.  My grandmother, a painter, tried to train me in the fine arts, including oil paints and water colors, but I didn’t really take to it. It was a little slow for me. I preferred the immediacy of photography.

Why Mongolia and Tibet?

My grandmother (Houston, TX-based painter Jo Sherwood) initially sparked my interest in capturing these cultures. A native of the Netherlands, she was very interested in what it means to take in another’s culture and be fully aware of it. A lifelong traveler, she noticed that it was becoming increasingly difficult to find authentic cultures and rural communities that hadn’t been westernized. Her art began to reflect those cultures and she started doing social activism, working with governments to make people aware of the effects of globalization on cultures that don’t have as much control over their way of life. Preserving those cultures, giving them a voice and bringing them to life as authentically and purely and humanly as possible is definitely worth fighting for.

Like I said, I like tinkering with things! Whenever I’m exposed to a new environment, I like to figure out why things are the way they are and how to make them better. When I got to Villanova there were things that didn’t make sense to me, things that didn’t work like I thought they could or should. So I responded to an ad for student government and was class president freshman year. My sophomore year I moved into mission and social justice issues, working with campus ministry. My junior year I became more involved in a leadership capacity and decided to run for president.

Given the demands of an engineering degree, how did you balance everything?

Prioritizing. Time management. Delegating. Everybody has the same 24-hours every day. What you do with it is up to you. When people say they’re too busy to do something, they’re making a choice, basically saying that whatever they’re not doing is not a priority. So I’m always making sure my priorities are in order.

People. I love figuring out how they think and why they think the way they do. I ask people “why” a lot!

When was the last time you felt inspired?

Every single day. Every moment. Especially at a place like Villanova. If you woke up today, there’s a reason.

Where did you feel most at ease on campus?

There’s a tree in front of the Pit that’s beautiful. You walk under it and you’re in a different world. It’s also very easy to climb, so whenever I’m overwhelmed, tired or need an escape, I head straight to the tree.

What do you miss most about Villanova?

The people. I know that there are great people everywhere, but Villanova specifically is a place that is so open. People are so willing to help each other; that’s a rare thing. The possibilities for connections here are endless; that’s not going to be so easy to find when I leave. But like St. Augustine said, “We are pilgrims, not residents.” We keep moving.

Anthony returned home to Houston, Texas, where he is a Process Improvement Specialist for Johnson Matthey.