The Mendel Medal will be awarded to Dr. Ellen Mosley-Thompson and Dr. Lonnie G. Thompson from The Ohio State University, for their contributions toward improved understanding of the Earth’s climate system.

Named for 19th century Augustinian friar and scientist Gregor Mendel, the Mendel Medal is given to outstanding contemporary scientists who have demonstrated that between true science and true religion, there is no intrinsic conflict. 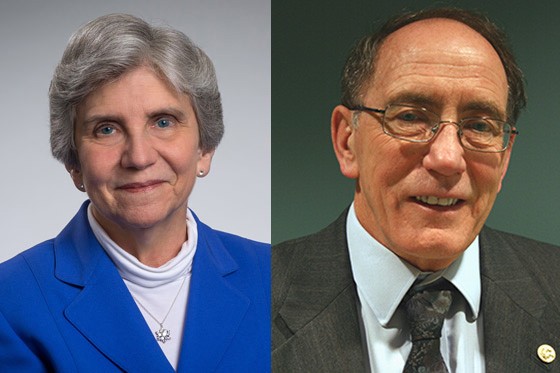 Dr. Mosley-Thompson and Dr. Thompson will deliver the Mendel Medal lecture titled, “Rapidly Changing Climate and Retreating Glaciers: Past, Present, and Future Societal Impacts,” on Friday, Oct. 29, 2021, at 2 p.m., in the Villanova Room of the University’s Connelly Center. The event is free and open to the public. All visitors to campus must follow the University’s masking guidelines.

“Villanova University is pleased to present the Mendel Medal—that honors the scientific work of the Augustinian Abbot Gregor Mendel—to Dr. Ellen Mosley-Thompson and Dr. Lonnie G. Thompson,” said the Rev. Kail Ellis, OSA, PhD, Special Assistant to the President and Dean Emeritus of the College of Liberal Arts and Sciences at Villanova University. “Their research has provided an essential perspective on the effect of heatwaves, heavy precipitation, droughts and tropical cyclones, as well as the impact of human-induced extreme climate change on the United States and across the globe. In particular, their assessment of the impacts of future climate change on natural systems has provided an essential service to the people who inhabit these regions. Villanova recognizes the Thompsons for their contributions toward improved understanding of the Earth’s climate system, both past and present.”

Dr. Mosley-Thompson uses the chemical and physical properties preserved in cores collected from both polar ice sheets and high mountain glaciers to reconstruct Earth’s complex climate history. She has led nine expeditions to Antarctica and six to Greenland to retrieve ice cores. She has published 137 peer-reviewed papers and is the recipient of 53 research grants. She is an elected member of the National Academy of Sciences, the American Academy of Arts and Sciences and the American Philosophical Society and is a Fellow of the American Geophysical Union and the American Association for the Advancement of Science.

Dr. Lonnie G. Thompson’s research has propelled the field of ice core paleoclimatology out of the Polar Regions to the highest tropical and subtropical ice fields. He and the team at Ohio State have developed light-weight solar powered drilling equipment for acquisition of histories from ice fields in the tropical South American Andes, the Himalayas and on Kilimanjaro. These paleoclimate histories have advanced our understanding of the coupled nature of the Earth’s climate system. He has published 245 peer-reviewed publications including several in the journal Science, led 63 field programs and secured 76 research grants as the principal investigator or co-principal investigator. Dr. Thompson has been recognized with many honors and awards, including the National Medal of Science and the Tyler Prize (the World Prize for Environmental Achievement). In addition, he is a Fellow of the American Geophysical Union and the American Association for the Advancement of Science and an elected member of the American Philosophical Society and the National Academy of Sciences.

As an institution founded by the Augustinian Order, Villanova University plays a key role in sustaining Mendel’s legacy. The Mendel Medal is awarded to outstanding scientists who have done much by their painstaking work to advance the cause of science and, by their lives and their standing before the world as scientists, have demonstrated that between true science and true religion there is no intrinsic conflict. Click here for more information on the Mendel Medal and its history.