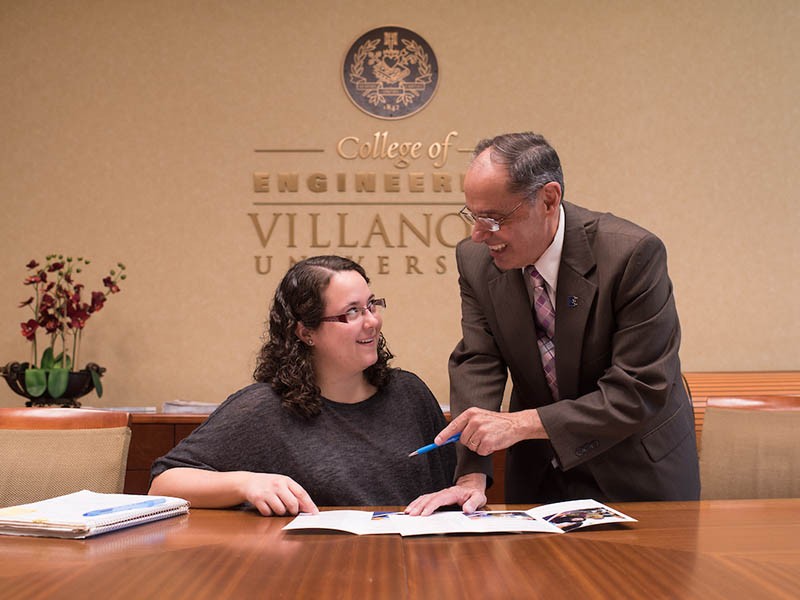 Since 2016, Falcone has led the College’s Career Compass program as the director of Professional Development and Experiential Education. Prior to that, he spent more than four decades in the Department of Civil and Environmental Engineering, teaching both undergraduate and graduate level courses. His areas of technical expertise include hydraulics, hydrology, fluid mechanics, water resources master planning and international water resources development.

This is not the first time Falcone has been recognized for his contributions to the industry. In 2017 he was named “Educator of the Year” by the Philadelphia Section of ASCE, and in 1991 Villanova’s Engineering Alumni Society presented him with a Meritorious Service Award. In 1999 he received the College’s Farrell Award, which recognizes a faculty or staff member who demonstrates exemplary personal concern for students. Active in the community, he is the chairman of the John McKee Scholarship Committee, which provides college scholarships for fatherless boys throughout the Delaware Valley. Falcone also is a founding diplomate in the American Academy of Water Resources Engineers.

A retired captain, Civil Engineer Corps, United States Navy, Falcone served as a consultant to the U.S. Department of State in the fields of international arms control and arms control treaty monitoring from 2004–2013. He has received numerous medals and awards from the U.S. Department of Defense and has held four Navy Civil Engineer Corps command positions.

In addition to his teaching and military experience, Falcone has been active in Villanova’s Engineering Service Learning program since 2010, having served as the lead engineer and faculty member for a water resources master plan in southeastern Panama. His participation is ongoing and expanding.

An avid sailor, Falcone enjoys writing for sailing publications. He also is an accomplished singer, performing both as a soloist and choral member.

Associate Dean of Academic Affairs Dr. Andrea Welker has worked with Falcone since 1999 and describes him as most deserving of this award. She says: “Ethics and professionalism have been at the core of Frank’s unique career spanning consulting, military service and academics. Personally, I have always valued his experience and thoughtfulness. As a professional engineer, he brings his courage and conviction to all that he does.”

When asked what the Outstanding Service to Engineering award means to him, Falcone says, “I’ve been extremely fortunate in my career to have numerous opportunities to work with truly outstanding engineering professionals from the Delaware Valley and beyond. This award is visible recognition of us all working together to help improve our world.”