According to Yale’s Program on Climate Change Communication in 2016, the majority of Americans believe global warming is happening. 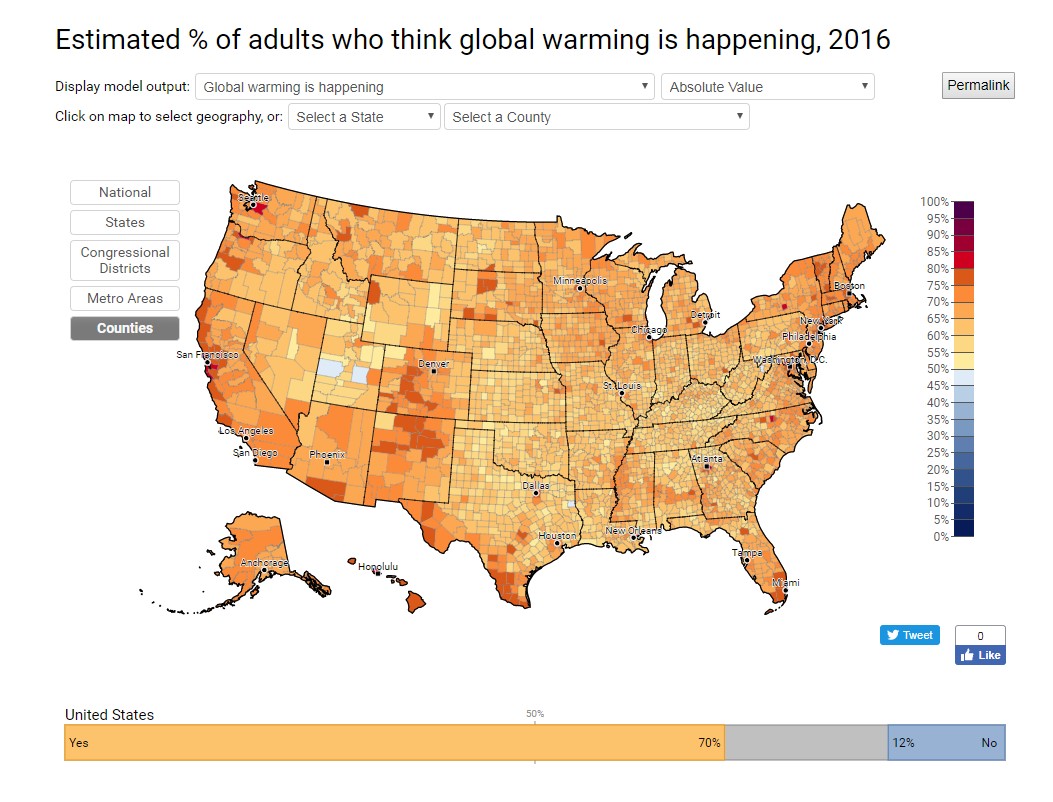 Despite the majority of Americans believing climate change is happening, our elected officials have yet to pass any legislation to help prevent the impacts of climate change or curb the impact of global warming on our country. Why? Because we do not do enough to talk about climate change in our daily lives. 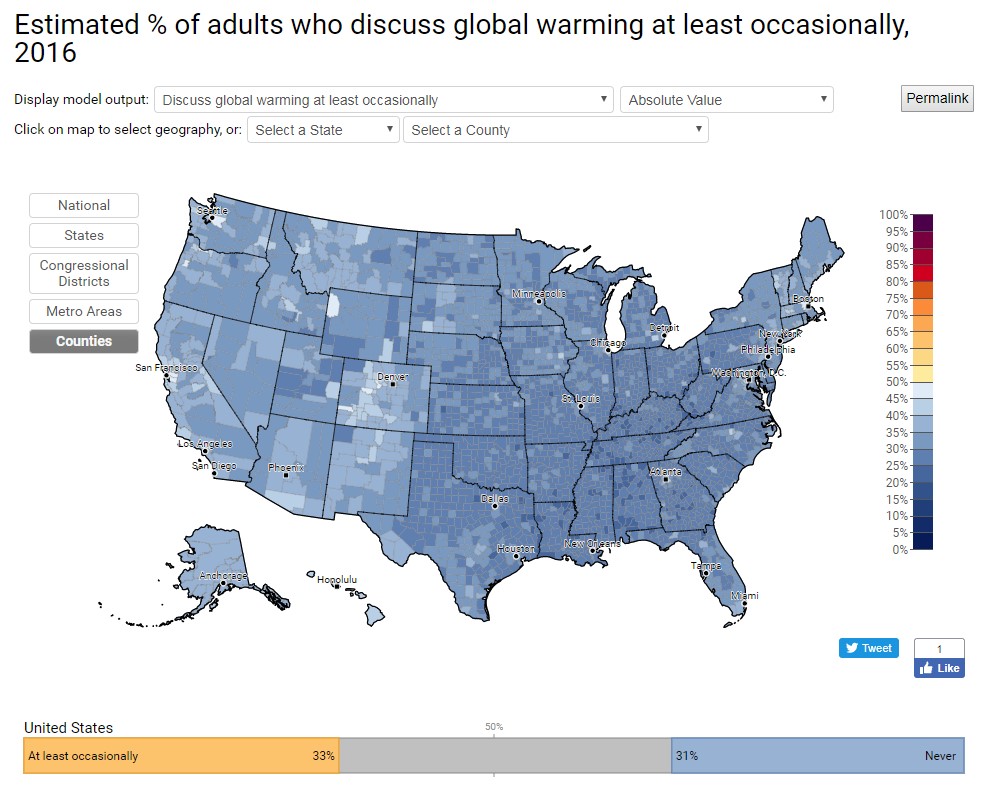 +-The climate has changed before 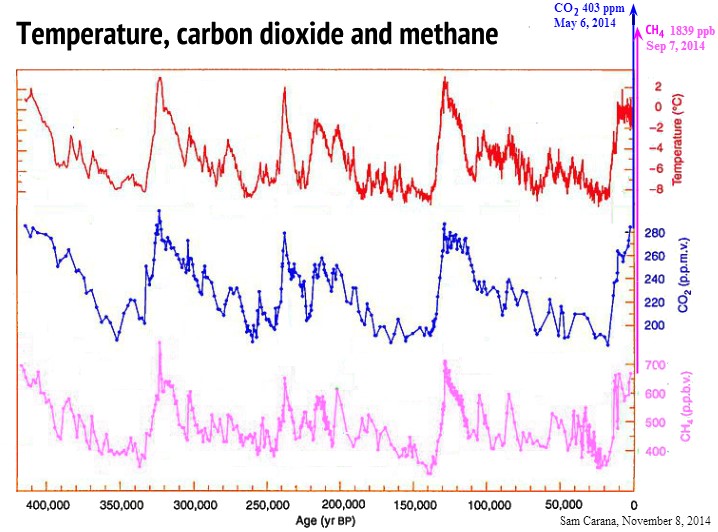 Yes, the climate actually has changed before. The climate has changed in the past due to natural fluctuations of CO2 in the atmosphere, but what we are witnessing now is not natural, and is instead man-made.

Humans today are emitting exponential quantities of CO2 and methane, at a rate much faster than seen anywhere in earth’s history.

Historic jumps in Earth’s temperature are due to rapid increases in greenhouse gas emissions, similar to what is happening today. The difference is that in the past, the earth had millions of years to adjust to these jumps in atmospheric CO2. The intense, modern emissions of CO2 caused by recent human industry has happened in mere the decades since the Industrial Revolution.

The effects of such a drastic increase in atmospheric methane and carbon emissions are rising sea levels due to glacial melt, ocean acidification, and warmer global average temperatures.

+-There is no consensus among scientists

First of all, a consensus in science is much different than a consensus in politics. Scientists reach a consensus based on evidence. A consistent weight of evidence over time forms the basis of a scientific consensus.

When experts in climate science are polled, at least 97% of scientists agree that climate change is happening, that it is human caused, and that it could prove to be deadly if we do not intervene.

+-But it still snows! 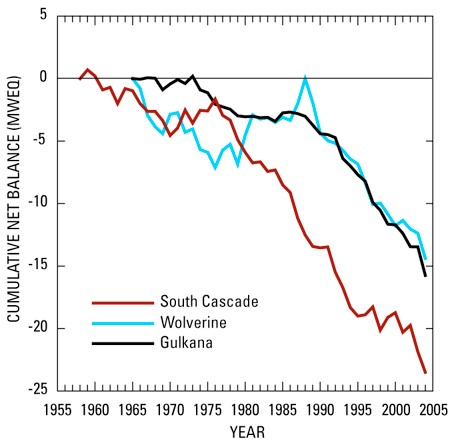 Long term changes and trends of glacier activity show 90% of glaciers are shrinking worldwide, proving the basis of the Global Glacier Recession.

During the 2009/10 winter, the northeast saw record breaking snowstorms. In Philly, citizens experienced two 100-year snowstorms, nicknamed Snowmageddon. When the entire year’s average temperatures were reviewed, 2009 was the second hottest year on record at the time, and January 2010 was the hottest January on record at the time. So why are we seeing big snow storms?

As the climate warms, evaporation from the oceans increases. This gives way to more water vapor in the atmosphere. Water vapor has increased over 5% in the 20th century alone. The extra water vapor has to go somewhere, leading to extreme precipitation events that can occur in the summer or winter. 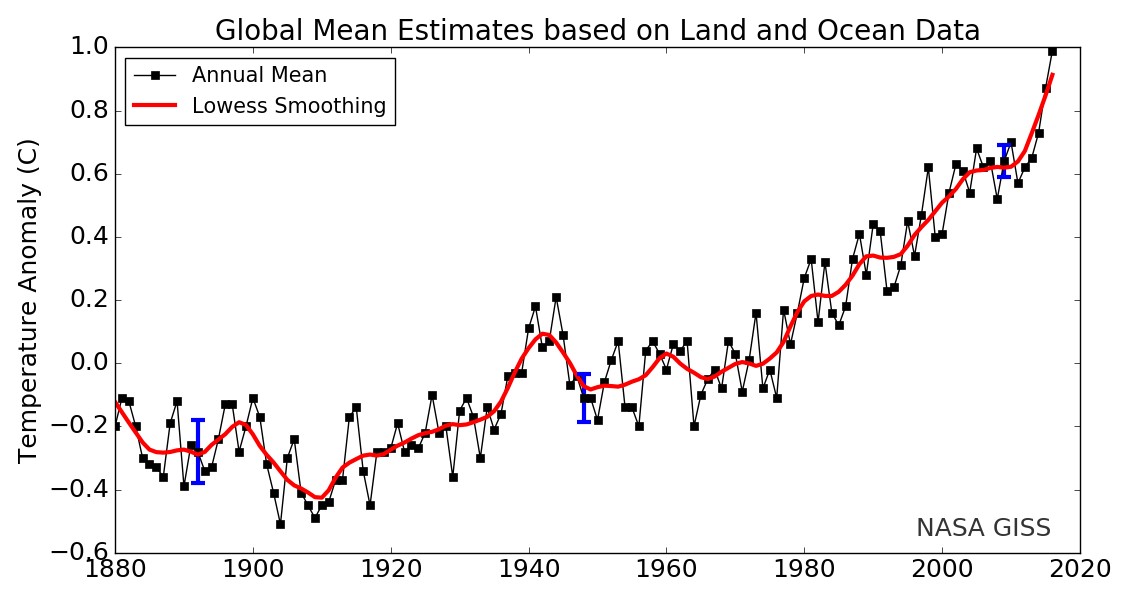 We know global warming is happening, not because of computer model projections, but because of physical evidence, such as consistently warmer-than-average surface temperatures.

+-You can’t prove a storm is caused by climate change

Storms are not caused by global warming, but have greater intensity due to a warmer climate.

As our atmosphere and oceans warming, there is an increase in thermal energy storms can feed off of. Tropical storms and hurricanes, for example, feed off of thermal energy from warming oceans. This is why hurricane season lasts from August to early November, when the Atlantic Ocean is at its warmest.

On average, there about 90 tropical storms per year, and frequency has not been linked to climate change.

+-Environmental regulations will destroy our economy

Multiple countries and states around the world have instituted a carbon tax to cover the cost that carbon emissions have on society. Carbon emissions are an externality, meaning they have a negative impact on people who are not responsible for their production. A carbon price allows municipalities to help those who are most severely impacted by the effects of carbon pollution and climate change, and encourages polluters to find new ways of operating that do not result in high emission rates.

Now the rest of Canada will follow British Columbia’s lead. Prime Minister Justin Trudeau announced in October that each providence will have “until 2018 to adopt a carbon price scheme, or the federal government will step in and impose a price for them”.

One could argue that not responding to climate change will destroy our economy. The US government has experienced an increase in spending directed toward natural disaster relief.

There is now concern that not responding to climate change will threaten our right to property.

These are all signs that insurance companies are starting to see climate change as a risk to their bottom line.

+-Environmental activists are taking away our good paying jobs

History shows that the transition to renewable energy has resulted in a net gain of jobs, not a net loss.

The Department of Energy, in their 2017 U.S. Energy and Employment Report, stated that jobs provided by clean energy companies are driving the country’s economy. Those clean electricity jobs out-employ the fossil fuel industry by 5 to 1, putting money in the pockets of more American workers.

+-I don’t want to change my lifestyle

While no one likes change, there is hope that a sustainable future will encourage efficient consumption and technology improvements will upgrade the products we use, causing them to be less harmful on the environment and society.

On the topic of motor vehicles:

Trucks are a staple of the American economy and culture. Popular truck manufactures have identified new ways of making their vehicles more energy efficient while still providing the power and performance consumers expect. The ford F-150 with aluminum body and EcoBoost has been a leader in the high performing truck market.

Tesla has proven that electric cars don’t have to be just a commuter car, but a real luxury sports vehicle. The newest Tesla Model S sedan is the third fastest car on the market, just behind the Farrari LaFerrari and the Porsche 918 Spyder.

What happens with the share economy, driverless cars, and companies like Uber and Lyft? The future is unknown, but there may be a natural transition away from personally owned vehicles that provides society with the comfort and convenience they want and expect.

+-Why should I care? Climate Change isn’t going to affect me.

You should care about climate change because it will affect you, and probably already has. The World Health Organization has named climate change as the greatest threat to global health in the 21st Century.

In the Mid-Atlantic and New England states, more people will experience vector-borne diseases, as a result of the pathogens carried by some mosquitoes, ticks, and fleas. You may already know someone who has been effected by Lyme disease or West Nile virus.

Miami deals with flood risks on a daily basis, and will spend upwards of $500 million to raise up their streets to reduce flooding at high tide.

With the increase in flooding around the country comes an increased risk of water-borne illnesses caused by pathogens (bacteria, viruses, protozoa), algae and/or cyanobacteria contamination.

The claim that increased CO2 in the atmosphere will increase food production because plants need CO2 to grow is false. Plants do need CO2, but like chocolate, too much of a good thing can be bad. Studies show that the projected increase in CO2 concentrations will result in lower levels of nutrition from the same food we eat today, requiring more food production for the same nutritional value.

Villanova University, as a community of learned and learning scholars, respecting the sacredness of all creation, accepts its responsibility to the integrity of Earth and its biodiversity, to the heritage of future generations, and to the security of nations. By utilizing the Augustinian values of Unitas, Veritas, and Caritas, meaning love thy neighbor, promote community unity, and live life in moderation through our curriculum, work environment, and operations, Villanova’s approach to sustainability exemplifies an emphasis on social justice and community service.

Our Commitment to Sustainability

Villanova University, as a community of learned and learning scholars, respecting the sacredness of all creation, accepts its responsibility to the integrity of Earth and its biodiversity, to the heritage of future generations, and to the security of nations. By utilizing the Augustinian values of Unitas, Veritas, and Caritas, meaning love thy neighbor, promote community unity, and live life in moderation through our curriculum, work environment, and operations, Villanova’s approach to sustainability exemplifies an emphasis on social justice and community service.