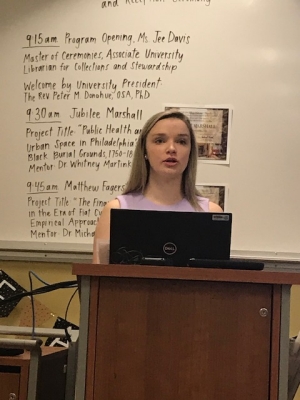 Senior Erin Donnelly, Nursing's 2019 Falvey Scholar spoke Friday morning, April 26, at the Villanova University Falvey Scholars Awards Presentation on her paper about moral injury in veterans which she had also presented March 29 at the Ethics of War and Peace Conference offered by Villanova University and the United States Military Academy and April 27 as part of Nursing's Naratil Family Health & Human Values Lecture Series. "My interest in the care of veterans began after my clinical rotation at the Corporal Michael Crescenz VA Medical Center in Philadelphia on the psychiatric/mental health units. After many powerful encounters with veteran patients, I started asking questions about best practices of care. This led me to my mentor Dr. Helene Moriarty and the topic of moral injury," she explains.

In Erin's paper, she notes, "The concept of moral injury has been circulating in clinical literature for just over a decade, but its roots date back to a much earlier time period. A psychological injury that results from 'transgressions of deeply held moral and ethical beliefs and expectations' has been documented in history as early as the warrior culture of Ancient Greece. As the term 'moral injury' suggests, the problem is multi-dimensional. The name itself denotes that the care required would be physical and psychological, in order to heal the'“injury', but also spiritual to address the moral distress and conflict. In recent years, more clinicians and interdisciplinary teams have sought to operationalize the definition of moral injury, in order to design interventions and treat military personnel returning from service. This is where the interdisciplinary team has the opportunity to fill a role in the care of veteran patients with wounded souls."

Erin further explains, "In order for a veteran to have a 'moral injury', he or she must experience a 'transgressive act'. These acts may include perpetration or commission (an example would be killing), an inability to prevent death or harm (an omission), witnessing these events, losing a loved one, being betrayed by a trusted leader, and/or being exposed to an environment of human suffering. A critical characteristic common to these events is that they are inconsistent with the moral code of a veteran and will cause inner conflict and dissonance. In general, servicemen and women who endure combat exposure and longer deployments are at an increased risk for experiencing transgressive events."

Erin believes a holistic approach is critical for success. She summarizes, "As the government changes its policy related to healthcare for veterans, private medical systems will begin to see more of these patients. That is why it is important to be informed about evidenced-based practice whether you are in the VA system or not. Particularly in the nursing community, the Joining Forces national campaign is seeking to educate 3.5 million nurses about the needs of veterans and their families. Remember to ask: Have you ever served? This opens the line of communication and referrals to psychological services, pastoral care, and community resources to reconcile any morally injurious event. Very recently, I learned about a 12-week moral injury group for Veterans at the VA in Philadelphia. It is serving its sixth cohort of the group and involves the collaboration of the chaplain service and behavioral health. These are the types of programs that are becoming available to veterans – which is exciting, because it means that they are getting the care and support necessary to heal. Though moral injury is not a medical diagnosis, and may never become one, it is important for veterans with these experiences to have access to multi-dimensional care to relieve the burdens of war that they carry."