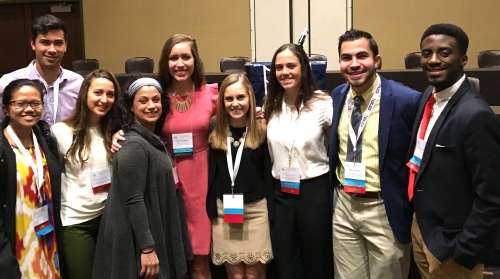 The Student Nurses' Association of Pennsylvania (SNAP) hosted the 65th Annual State Convention at the Kalahari Resort and Convention Center, Pocono Manor, Pa. Nov. 15 – 18. The Convention, which gathered chapters from across the state, was dedicated to the memory of M. Louise Fitzpatrick, EdD, RN, FAAN, former dean of the Villanova University College of Nursing who passed away Sept. 1.

The Villanova chapter, one of the largest voluntary membership chapters with 100-200 members, was presented with the Chapter Excellence Award, the state’s highest chapter award. The 26 member Villanova delegation was led by SNAP- Villanova president, Katrina Garzon, and included freshmen through seniors, as well as students from the Alternate and BSN Express programs.

Throughout the 3 day convention, Villanova University College of Nursing and its students, were recognized by their peers for leadership and extraordinary achievement. Several SNAP-Villanova delegates were elected to SNAP board members, including:

Villanova nursing students have served on the SNAP board since 1983, however, this is the first time Villanovans have held the offices of president and vice-president in the same year.

Several Villanova University College of Nursing alumni also participated in the Convention, including: