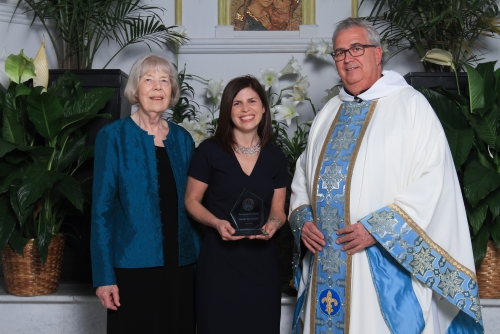 The achievements of Jennifer Yost ’00 BSN, PhD, RN were celebrated on April 29 during the College of Nursing’s 28th Annual Mass and Alumni Awards Ceremony, held in the St. Thomas of Villanova Church.

In August 1996 a young eager freshman arrived at Villanova from New Jersey – and so the nursing career of Jennifer Yost began. She was a very good student with energy that could hardly be contained. Before we knew it, she was leading nursing students as the president of the Student Nurses' Association of Pennsylvania, a constituent of the National Student Nurses' Association.

Always clear about her career goals, she served as an extern in the intensive care unit at the Children's Hospital of Philadelphia while she was still an undergraduate student. Upon graduating in May 2000, newly minted and licensed, she became a staff nurse in pediatric intensive care unit at NYU Medical Center where she soon became a senior nurse clinician. While in Manhattan, she studied for her master’s degree which was awarded in 2005 and completed her PhD in May 2009, all at NYU.

Her interest began to focus on a major concern of study and research that had captured nursing's attention – namely evidence-based practice and its essential and fundamental role in making clinical and critical judgments that support decisions relative to patient care. An opportunity presented itself in the form of a post-doctoral fellowship at McMaster University School of Nursing in Hamilton, Ontario (near Toronto) where she continues to teach and has been promoted to the rank of associate professor with tenure.

At McMaster she also holds the title of Knowledge Translation Specialist in the Office of the Vice President for Quality and Performance. Active in university affairs at McMaster, Jenny has also been involved in community and professional nursing organizations. She teaches undergraduate and graduate students and has been actively pursuing her research with several funded grants on which she collaborated or was the primary investigator. She has a growing number of scholarly publications and is an editor of a research text.

Jenny's first acknowledgement of her work was presented right here in this Church during Convocation the week of her graduation from Villanova. It was the Elaine McCaully Award for Clinical Excellence. At NYU, she was the recipient of several awards and scholarships including The Florence Downs Doctoral Award in Research and Theory Development.

Jenny is an example of an emerging nursing scholar, educator and professional whose work will have a lasting impact on the development of critical judgments and best practices in nursing care.

We know Jennifer Yost very well. She has always remained connected to the College, the University and she is an avid Wildcat. Recently we have learned that Jenny will be returning to the United States having completed her work in Canada. She will join our faculty in August.

The College of Nursing is proud to claim Dr. Jennifer Yost and to acknowledge her as our 2017 Emerging Scholar.