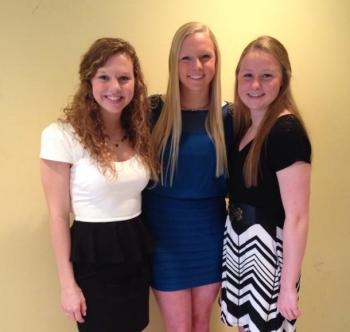 Patient records aren’t the only ones that three seniors nursing students have been eyeing in the past few weeks. At the recent 2017 Big East Swimming and Diving Championships in East Meadow, NY, held February 22-25, Mary Snyder, Erin Merkle and Jessie Randolph chased history in pursuit of points and records in the pool. They left the Nassau County Aquatic Center as champions. 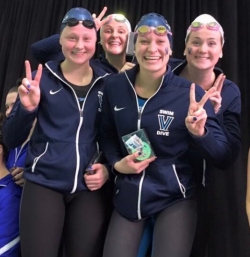 Mary Snyder, left, with her 800 free relay teammates who broke a school record in the first women's event of the Big East Championships.

In the first women’s event, Mary Snyder and 3 teammates opened the night by cracking a school record in the 800 yard freestyle with a winning time of 7:11:35. For Mary, a native of St. Charles, Ill. and daughter of Cathy McBryan Snyder ’80 BSN, it was her second straight win in the event at the Big East Championship (the relay team also won it the previous two years before Mary joined them, for a total of four in a row) . Mary was named to the 2017 All-BIG EAST Swimming and Diving team on March 15 for her contributions in this event as well as the A finals in the 500 free (3rd place), 200 free (see below) and 100 free (6th place). According to a team release, there were 81 student-athletes named to the All-BIG EAST team. Villanova’s women’s team led the conference with 14; the men had 9. “I was so happy and honored to represent Villanova’s College of Nursing at Big East Championships!” says Mary, who hopes to launch her pediatric nursing career at the Children’s Hospital of Philadelphia where she externed last summer.

York, Pa. native Erin Merkle was an A finalist in the 500 free (8th place) and also competed in the A final of the 400 Individual Medley (7th place), and 200 yard butterfly (8th place). Like Mary and Jessie, she contributed numerous points to her team’s total with her top finishes.  Those robust 1,017 total team points ultimately led to the Villanova women’s swimming and diving team winning its fourth consecutive Big East title. Erin looks forward to starting her new career in the neonatal intensive care unit at Magee-Women's Hospital of University of Pittsburgh Medical Center and in the future returning to school to become a nurse practitioner. Erin shares, “It has been an incredible opportunity to be a part of both the nursing and swimming programs here at Villanova and I am grateful to represent both.” 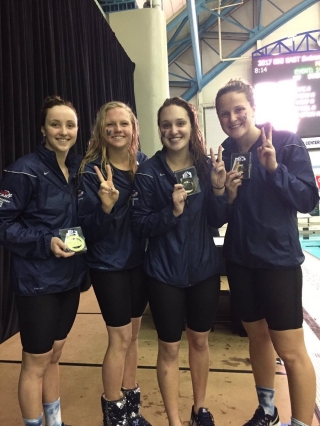 Jessie Randolph, 2nd from left, with her 200 free relay team, set a school record, the 4th consecutive time that Villanova women have done so.

Floridian Jessie Randolph, who hails from Davie, was part of a school record-setting 200 freestyle relay that won gold with a school record of 1:30:53. She and her teammates also won the 400 yard freestyle relay (both the 200- and 400- wins were the fourth consecutive triumphs for the squad). Jessie swam in the A final of the 200 freestyle. In that impressive race, Villanova secured all six spots on the awards podium, with Jessie in 3rd and Mary in 4th place. In the 100 yard free, Jessie placed 4th. In the B final for the 50 yard free, she placed 10th. Jessie wants to pursue surgical nursing after graduation but in the meantime joins Mary on the roster of the women’s 2017 All-BIG EAST Swimming and Diving team. Jessie notes, “Being a part of the swimming and nursing programs here at Villanova have provided me with endless opportunities and challenges that I am so grateful for, and that have helped me grow as an individual.”