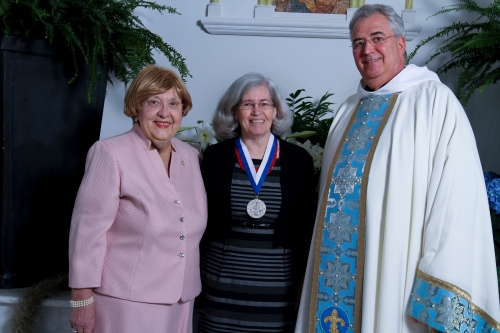 Dr. Diane M. Wink received the 2015 Medallion for Distinguished Contributions to Nursing Education. The following is her citation.

Diane M. Wink is a dynamic leader with an enthusiasm for nursing education that developed at the very beginning of her career. Given healthcare trends and known shortage of nursing faculty, Diane’s dedication and passion for educating nurses and nursing leaders are integral to continuing the growth of the profession.

After graduating from Adelphi University with her BSN, Diane earned her master’s degree in nursing from Villanova University in 1985 while serving as a clinical instructor for the College of Nursing.  She later earned her Doctorate in Education from the University of Central Florida in 1992 and a post-master’s Family Nurse Practitioner certificate from East Carolina University in 1998.

Diane has practiced as an FNP for various health centers in Florida, and currently serves as Professor and the Hugh F. and Jeannette G. McKean Endowed Chair in Nursing at UCF, where she is also Coordinator of the Nurse Educator MSN track. Her dean, Jean Leuner, described her as “a pivotal architect” of UCF’s community-based nursing education curriculum. She is an exemplar to her colleagues, and has enriched nursing academia with her impressive number of nursing education publications in scholarly journals. Diane is a notable pioneer in the use of technology in nursing education. Her publications span a range of topics from computer basics to internet tools and teaching strategies using technology, as well as distance education. Diane is on the editorial boards of Nurse Educator and the Journal of Nursing Education and was co-editor and author of the National Organization of Nurse Practitioner Faculties’ Guidelines for Distance Education and Enhanced Technology in Nurse Practitioner Programs.

As a nationally recognized educator and leader, Diane was inducted as a Fellow of the American Academy of Nurse Practitioners in 2010. In addition, she has received numerous awards and accolades throughout her inspirational career, including the Excellence in Graduate Teaching Award from University of Central Florida’s College of Nursing in 2012.

For her impact as an educator and colleague, scholarly work, and energetic leadership, the College of Nursing is delighted to award its Medallion for Distinguished Contributions to Nursing Education to Diane M. Wink.