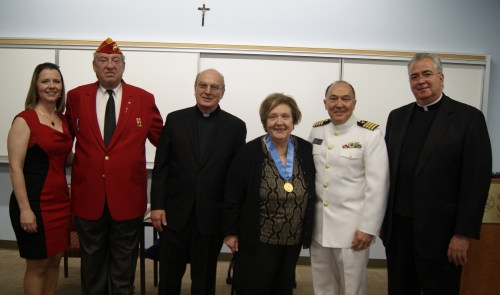 With Dean Fitzpatrick during the presentation of the Legion of Honor Gold Medallion of the Chapel of Four Chaplains on May 20th were (L to R) Christine Beady, executive director of the Chapel; Larry Herrmann, Esq., member of the Board of Directors; Rev. Kail Ellis, OSA, vice president for Academic Affairs; Capt. (Ret.) Louis Cavaliere, USN, co-chair of Board of Directors and Rev. Peter M. Donohue, OSA, University president.

In a surprise May 20th ceremony following the final faculty meeting of the academic year, Dean M. Louise Fitzpatrick, EdD, RN, FAAN, Connelly Endowed Dean and Professor of the Villanova University College of Nursing, was awarded the Legion of Honor Gold Medallion of the Philadelphia-based Chapel of Four Chaplains.

This Medallion is the highest and most prestigious award presented by the organization. It is given to one person each year whose leadership has brought his or her actions to worldwide attention, and whose very life epitomizes the spirit of the sacrifice of the Four Chaplains. United States presidents are among the past recipients of the Gold Medallion.

The Four Chaplains Memorial Foundation (www.fourchaplains.org) exists to further the cause of “unity without uniformity” by encouraging goodwill and cooperation among all people. The organization achieves its mission by advocating for and honoring people whose deeds symbolize the legacy of the Four Chaplains aboard the U.S.A.T. Dorchester in 1943. Its Legion of Honor Award programs publicly recognize and honor outstanding members of society whose lives model the giving spirit and unconditional service to community, nation, and humanity without regard to race, religion, or creed exemplified so dramatically by the Four Chaplains.

According to her nominating statement, Dean Fitzpatrick was honored as a “living legend of the profession of Nursing and a national and international icon in the fields of Nursing education and history...she has devoted her life to education, service to others and caregiving in the highest sense.” The organization also acknowledged her global impact on service to the underserved.