Trauma and courage-the life of Navy nurses in Afghanistan 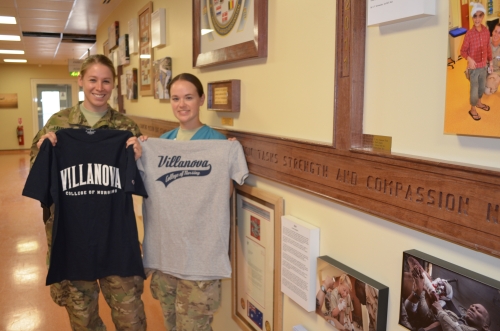 Lts. Angela Laurance and Justine Cisterino, 2009 BSN classmates, are now together in Kandahar as Navy nurses caring for military and civilian patients, where mass trauma casualties are the most physically, mentally and emotionally challenging moments.

Lt. Angela Laurance, USN, NC, ’09 BSN was a high school freshman during the September 11th terrorist attacks and says, “I never would've thought my path would lead me here today.” “Here” is Kandahar, Afghanistan where the Navy nurse has started a seven-month tour in the operating room of the NATO Role 3 Multinational Medical Unit. “It really is an honor,” she notes, “It's amazing to see that out of the ruin of that day has come the best in human nature - just very ordinary people who accomplish extraordinary tasks every day out here.”  She shares the base with others from around the globe, including Australian, Romanian, British, Belgian and Slovakian colleagues, as well as Lt. Justine Cisterino, USN, NC, ’09 BSN who works on the intermediate care ward. 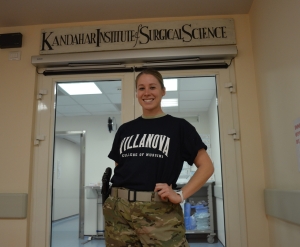 Laurance describes the mission as “...providing efficient and effective care of trauma patients who arrive around the clock – U.S. and coalition forces, Afghan National Army, Afghan National Police, and detainees alike.” She says the mortar-protected hospital boasts a 98% patient survivability rate and has nearly everything a stateside hospital has from drugs to advanced radiology equipment-- impressive since three years ago all patient care was provided in tents.  She acknowledges the care is only as good as that provided on the front lines in the first 5-10 minutes of injury, along with the speed of the Medevac teams getting patients to the hospital within 20-30 minutes. “Every day I am amazed by the surgeons, nurses, techs, and corpsmen - the patience, resources, hours an entire team will put into saving one life, how the whole hospital responds to the call within minutes, and how focused my group is in doing all we can for each patient that comes through our doors,” Laurance says, noting they see a majority of orthopedic and neurosurgical cases.

Laurance says she observes a decrease in the number of patients as Afghan medical counterparts have started treating their own patients. Mentor programs with local hospitals and staff are underway and they are supporting the Afghan people in their efforts to build lasting sustainable medical infrastructures. As the troops draw down in early 2014, so too will the Role 3, which may soon transition to a Role 2 with fewer surgeries and more clinic and referral care, as they send patients elsewhere for operative care.

Challenged by heat—now cooling from 130 to 100 degrees as fall arrives—as well as dust, the stress of constant vigilance, frequent rocket attacks, detainee care and intermittent mass casualties, Laurance also integrates  non-nursing duties into her life. She is the Public Affairs Officer for the command, and keeps busy touring dignitaries and VIPs through the hospital. She assists an endless stream of journalists and documentary teams, and founded a Role 3 newsletter for families and friends back home to showcase the staff and the good work they do. Laurance keeps up the morale of staff and patients through a soccer team she started, going up against rival Army players or those from other countries on base.

At heart she remains a nurse, offering “There are a few of our guys’ faces that will stick with me for a while.”