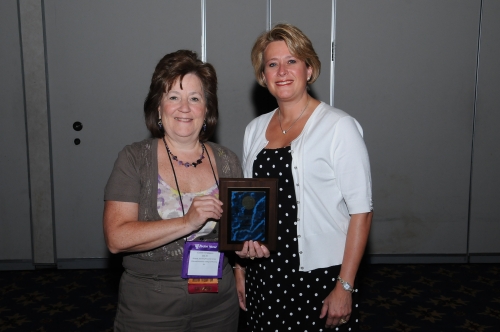 Colleen Meakim, MSN, RN, director of the Learning Resource Center (LRC), received the Service Award of The International Nursing Association for Clinical Simulation & Learning (INACSL) at their 12th Annual conference held in Las Vegas June 12-15, 2013. She has been the LRC director for 14 years, supporting and developing the simulation program and enhancing the College’s simulation lab environment and resources.

Meakim, a nursing educator for most of her career, has a long history of dedication to the group. She has served in a variety of roles for INACSL including: member of the INACSL Website Task Force, the INACSL Journal Committee, INACSL Conference Planning Task Force, and was involved in planning the 2006 LRC Conference held in Philadelphia, provided by Villanova University.

She was vice president for Communications from 2006-2008 (responsible for website and listserv); the BSN Representative from 2008-2011 and the Graduate Program representative from 2011-2013. She continues to serve on the Programs and Conference Planning Committees. She developed a history for the organization, an orientation for Board members, and most recently worked with the representative Chair to develop a Mentoring Program for members.

Her seminal work has not gone unnoticed. As she received her award, its impact was highlighted, with an INACSL representative noting that Meakim’s group is “defining the pedagogy of simulation not only for nursing but also for all our healthcare colleagues and professionals.” Meakim continues to share her expertise, presenting on topics such as: a learning styles program, evaluation of LRCs, managing an LRC, and simulation development, curricular integration, and debriefing.