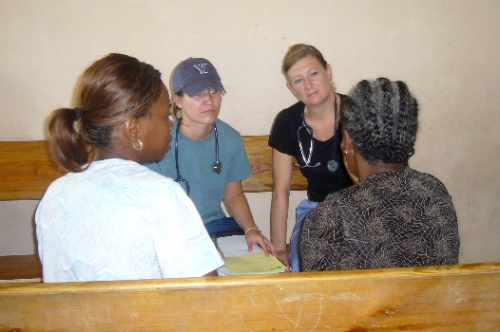 Tamara M. Kear, Ph.D., R.N., CNN, assistant professor in the College of Nursing, was the recipient of the 2013 Research Abstract Award by the American Nephrology Nurses' Association (ANNA), presented on April 23rd in Las Vegas at their 44th National Symposium for her presentation "Hypertension in Haitian Migrant Communities in the Dominican Republic: An Investigation of Rural Bateyes." She has made several trips to the country with nursing students who monitor blood pressures of hundreds of adult and discuss risk factors, management and medications.

In developing countries, hypertension is a growing chronic health condition. Its prevalence in the Caribbean is estimated to be as high as 55 percent in some populations—including Haitian migrant communities in the Dominican Republic. While there is anecdotal evidence from health-care teams, there is little actual data due to social class inequities and health-related disparities.

Dr. Kear is focusing her research on the Haitian migrant workers and families who live in bateyes, the shanty towns next to the sugar cane fields in the Dominican Republic. As an expert in nephrology nursing, Dr. Kear sees first-hand how damaging high blood pressure can be to the kidneys and health, in general. She is studying this population because “They are the ones who fall through the cracks of the health-care system. They are not considered Dominican citizens—even children born in the Dominican Republic of Haitian parents are not Dominican. Neither Haiti nor the Dominican Republic recognizes citizenship of these children, who have no country to call their home.” This makes for an increasingly vulnerable population that may be left unnoticed and untreated.

Dr. Kear’s study has been used to inform revisions to the health assessment tool used by American and Canadian teams who provide healthcare in the bateyes. She and her students have also been invited to present a workshop to a group of 200 Haitian women attending an annual Women's Retreat in Santo Domingo, DR in October 2013. This workshop will focus on blood pressure screening, health promotion and hypertension risk reduction measures, and a low-sodium cooking class and taste testing for the women. Dr. Kear reports that she has been using the data from her study to prepare for the workshop and has been working closely with Dominican and Haitian organizers for the Women's Retreat so that it meets the cultural and socioeconomic needs of this population.

Dr. Tamara Kear in the College of Nursing