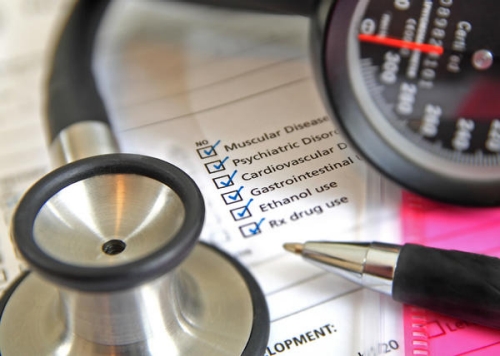 Since its inception in 2011, Nursing Without Borders (NWB) has collaborated with various local organizations in the hope of achieving their ultimate goal of empowering communities through self-sustaining projects. In February of 2013, the group continued their commitment to social justices and addressing healthcare inequities by helping coordinate and recruit volunteers for a health fair at St. Agnes Parish in West Chester, Pa. The parish houses a nurse-run clinic, St. Agnes Nurses’ Center, founded by the College of Nursing’s Maryanne Lieb, MSN, RN. She is clinical assistant professor and coordinator of the BSNExpress Program. The Center currently provides free health care to the uninsured and underinsured poor and serves a largely Hispanic population, operating completely on nurse and nurse practitioner volunteer hours.

In helping to organize the event, NWB teamed up with Elizabeth Toner, RN, and Terry Berkman, RN, MSN who is a center volunteer and St. Agnes parishioner. The group then created the first “Health and Hospitality Sunday.” Seven undergraduate, three graduate and one doctoral student volunteered to work alongside nurses from the Center as well as Dr. Bette Mariani, assistant professor in the College of Nursing.

Following each Mass, parishioners were encouraged to participate in free blood pressure, blood glucose, and body mass index/hydration screenings and enjoy a healthy snack, an alternative to the traditionally-served doughnuts. Because diabetes and obesity are common health issues among this population, consistent teaching, with special consideration towards diet, work hours, finances and cultures is an ongoing need. All parishioners being screened had the opportunity to speak with the volunteers about their results and their implications as well as appropriate interventions. Educational materials, made by the volunteers, were available to participants including bilingual handouts written at the sixth-grade reading-level. Translators were also present for the large Spanish-speaking population.

A total of 81 men and women were screened at the fair. Twenty to twenty-five percent of the population was either overweight or obese and dehydrated. They were also found to be at risk for diabetes and hypertension, with blood pressures greater than 120/80. These findings prove the importance of health fairs that bring awareness to potential health problems and the need for preventative care.

While many parishioners utilize the nurses’ center, several are still unaware of its presence and services. The health fair served to increase awareness within the parish and also to recruit volunteers for the center as it could not be sustained without them. Overall, the health fair was well-received and proved to be an effect tool for screening and educating patients. With conditions like hypertension, diabetes and obesity on the rise, there is an obvious need for education and subsequent screening in at-risk populations as seen at this health fair. In the future, NWB plans to continue this partnership with St. Agnes and organize nutrition and exercise classes for the women who come to the center.