Alumna cares for children with HIV/AIDS at home and abroad 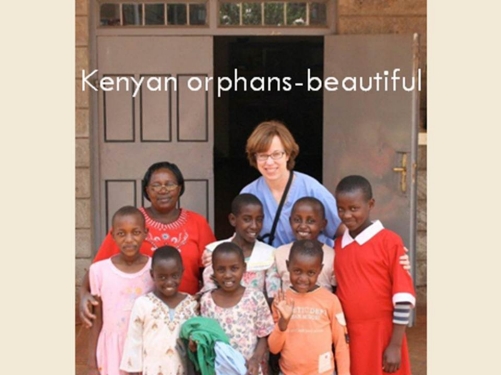 Cathy Horrigan Cahill ’78 BSN submitted this photo of her with a nurse and several of the children from AINA House in Kenya where she volunteered. It was used in the Villanova Nursing in 3 Words video.

Service was a frequent theme in submissions the College of Nursing received for its May 2012 National Nurses’ Week video project when constituents were asked to describe Villanova Nursing in three words.

Cathleen Horrigan Cahill ‘78 BSN is a pediatric nurse practitioner (PNP) who submitted a photo of her in Africa with some special children and the three words “Kenyan orphans – beautiful.”

In February 2012, Cathy and husband Andrew ’78 VSB traveled to east Africa, specifically to Meru—centrally located  in equatorial Kenya, on the eastern slope of Mount Kenya. They traveled with a group called "The Friends of Kenyan Orphans," a nonprofit formed to assist the Children’s Village, established in 1999 by Catholic priest Fr. Francis Limo Riwa to rescue orphaned and abandoned children from the streets. It is home and school for over 750 girls and boys.

According to the organization’s website, 500,000 children in Kenya are orphans or have lost one parent, one-fourth of the Kenyan population lives on less than a dollar a day, two in five do not have access to clean water and more than 2 million children and adults are HIV positive. 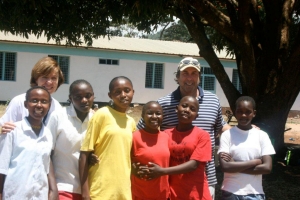 Cathy Horrigan Cahill ’78 BSN, joins husband Andrew ’78 BSN with some of the girls from St. Clare Centre in Meru, Kenya.

Cathy describes the volunteer group as small. There were seven people from a variety of backgrounds.  She was the only nurse. There was also a speech pathologist, a teacher, and two businessmen (Andrew one of them) plus the couple who organized the trip.

Cathy worked with children infected or affected by HIV/AIDS. “I provided nursing care to children in two different orphanages.  The first was AINA Children's Home for those with HIV/AIDS and the other was St. Clare's Centre for abandoned and orphaned girls. My husband spent his time interviewing and videotaping the girls and staff, developing promotional materials and working on the budget and capital campaign for St. Clare's.

“I could go on for hours about my experiences,” says Cathy, “Kenya is loaded with thousands of orphaned or abandoned kids and kids living in the streets.  There is extreme poverty, hunger, unimaginable trauma and loss...yet the children are remarkably resilient and kind.  They are absolutely beautiful kids and so spiritual.”

Cathy wants to draw attention to what's happening with the children in Kenya.  “They have very few resources and need our support,” she notes, suggesting the website www.friendsofkenyanorphans.org for more information. Cathy says, “It was an amazing trip and incredible experience.”