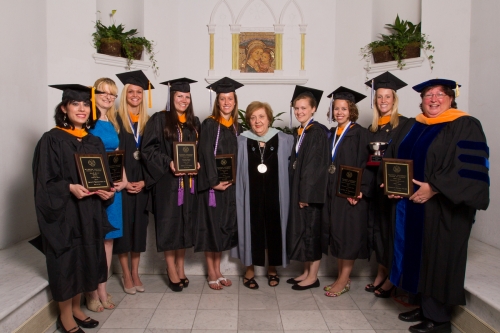 On May 19th, the St. Thomas of Villanova Church was packed with family and friends of the College of Nursing Class of 2012 as Convocation got underway. Hundreds of additional well-wishers filled four rooms in Driscoll Hall to watch the ceremony simulcast from the church. Additional family and friends viewed the proceedings from across the country. 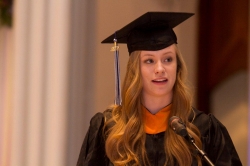 Senior Brooke Bettis from Boise, Idaho addressed the graduates. She encouraged her classmates to seek experiences, serve others and look inward. She spoke of being humbled by her global health experiences in Chulucanas, Peru and wanting to continue to serve.

M. Louise Fitzpatrick, EdD, RN, FAAN, Connelly Endowed Dean and Professor told the graduates that “your education, at whatever level, is a life changing experience.” She prompted the class to be open to new ideas, to take risks and reminded them of their obligation to step up and be heard in advocating for and improving patient care. She encouraged them to be flexible and nimble as they become global citizens. 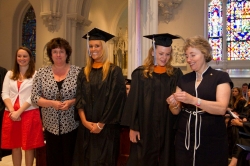 During Convocation, the College of Nursing acknowledged three women and one man commissioned the day before as ensigns in the United States Navy Nurse Corps. Additionally, seven seniors were called forward to receive their pins from relatives who are also graduates from the College. The pin designates them as alumni and exemplifying the motto “veritas, unitas, caritas.”  This year one of the pinners is not an alumna but rather faculty. Dr. Linda Copel, professor, pinned her daughter Megan Copel. There were three other mothers, one sister and two aunts who pinned seniors, representing the legacy of Villanova Nursing. They were:

Service and academic awards were given to undergraduate and graduate students. Special awards were bestowed upon the following degree candidates:

Senior Lauren Honeycutt, proud to be a commissioned ensign.

Graduates from the Sultanate of Oman.