The Global Humanitarian Missions of the U.S. Military 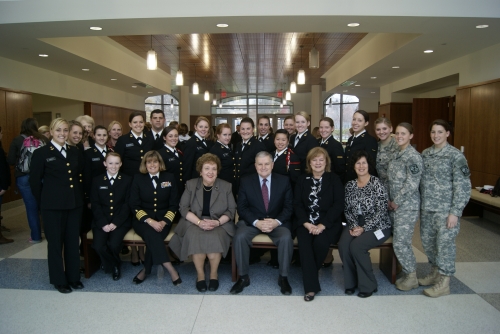 The College of Nursing was the fortunate recipient of one of General Zinni’s lectures as part of its 17th Annual Health and Human Values Lecture Series. General Zinni spoke to an overflowing room of students, faculty, staff, military colleagues, and community members. Among the military colleagues in attendance were two prior recipients of the College of Nursing’s Alumni Medallion for Leadership, Rear Admiral Christine Bruzek-Kohler, ’74 BSN, recently retired director of the Navy Nurse Corps and Commander of Navy Medicine West and Captain Maryalice Morro, ’83 BSN.

General Zinni’s distinguished military career has taken him to more than 70 countries with numerous command assignments. He has coordinated emergency security and disaster relief operations and other humanitarian aid efforts around the globe in such places as the Philippines, Turkey, Iraq, and Somalia. Since his retirement in 2000, General Zinni has continued to serve his country in a variety of diplomatic positions including special envoy to the Middle East. General Zinni humbly shared these experiences with the audience.

In addressing “The Global Humanitarian Missions of the U.S. Military”, General Zinni discussed the military’s involvement in this endeavor over the last two decades. These efforts focus on Disaster Relief Missions related to single event disasters such as earthquakes or tsunamis, Humanitarian Assistance resulting from chronic conditions such as drought, and the Complex Humanitarian Missions that involve the coordination of numerous groups and phases of support around conditions of disaster.

General Zinni shared his insights related to the importance of joint planning and collaboration with the local communities, government, and military in providing humanitarian relief to meet the cultural preferences and needs of the people. He described a situation in which the U.S. military set up a camp of tents for the people of Somalia in typical military fashion. The people of Somalia did not seek shelter in the tents because they were not comfortable with the arrangement of tents in straight rows. The military quickly learned they needed to allow the Somali people to rearrange the order of tents to better suit their cultural preferences. This was one of many stories that highlighted the importance of recognizing and respecting the culture of the community being served.

He also described the many challenges faced by the military in coordinating the humanitarian efforts. Such challenges include prioritizing the delivery of supplies by numerous organizations and companies.  General Zinni noted that over the last two decades of humanitarian service, the military has improved the strategies that assist in organizing and delivering the needed food, water, shelter, medical care, security, and communication services.

After an energetic question and answer period, General Zinni received a standing ovation from the audience.  Prior to his lecture he toured the Driscoll Hall clinical simulation labs and had lunch with Army and Navy ROTC students, generously sharing time and stories. He relayed his keen appreciation of nurses and corpsmen, starting when he was twice wounded in Vietnam. Today when he visits wounded warriors, he notes the positive impact of nurses especially when they care for the whole person and family.