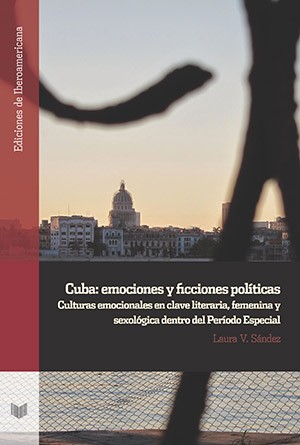 VILLANOVA, Pa – The complex history and culture of Cuba—including the nation’s relationship with the former Soviet Union—is often unfamiliar to those outside the region. In the 1990s, the visibility of Cuban women writers on the island began to change, coinciding with the collapse of the Soviet Bloc. This political, economic and ideological crisis was accompanied in Cuba with new ways of conceiving social and emotional bonds to grapple with new social and political realities.

In her new book Cuba: emociones y ficciones políticas: culturas emocionales en clave literaria, femenina y sexológica dentro del Período Especial, translated in English as Cuba: emotions and political fictions: emotional cultures in a literary, feminine and sexological key within the Special Period, Laura Sández, PhD, assistant professor in the Department of Spanish, explores a new approach to narratives produced by Cuban women during this time. The book considers the nation’s broad range of emotional and cultural expectations and anxieties through the lenses of intimacy, femininity and the body, revealing the emergence of unique emotional sociabilities during the Special Period in Times of Peace (1992-2002).

“[Cuba: emotions and political fictions] expands the notion of the intimate...to emphasize the relevance of studying dysphoric emotions in works of autofiction. Emotional cultures are presented within the context of this book as a more fluid way of understanding politics and its economies of emotion,” says Dr. Sández in the book.

“Sández is right in merging literary discourse with journalistic, political and cultural discourse through the investigation of emotional expressions showing an effective tool that will help us understand another way of seeing and feeling,” says reviewer Cristina Asencio Serrano, from the Universidad de Alicante.

Dr. Sández earned a doctorate in Hispanic and Luso-Brazilian Literatures and Languages from The Graduate Center, City University of New York; a Master of Arts in Performance Studies from Tisch School of the Arts, New York University; a Bachelor of Liberal Arts with an orientation in Media and Teaching from The Evergreen State College, and a Bachelor of Science in Nutrition from Universidad de Buenos Aires, Argentina. Dr. Sández’s research explores how massively altered social expectations relate to a shift in emotional experience.