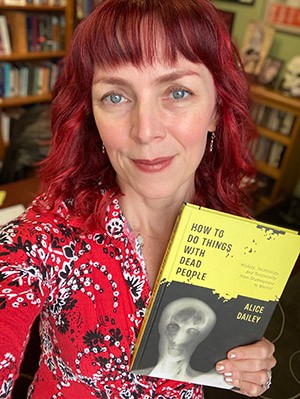 Villanova, PA – In How to Do Things with Dead People: History, Technology, and Temporality from Shakespeare to Warhol (Cornell University Press, 2022), Villanova English Professor Alice Dailey, PhD, offers a study of Shakespeare’s English history plays that initiates a radical break from the interpretive practices that have dominated literary criticism for the past several decades.

While those practices have traditionally prioritized the historical context from which a literary artifact emerges, Dr. Dailey’s book expands the plays’ context beyond the conditions of Shakespeare’s England, allowing readers to consider them among human contrivances for representing and relating to the dead.

How to Do Things with Dead People describes Shakespeare’s historical drama as—fundamentally—a reproductive technology by which living replicas of dead historical figures are animated and re-killed on stage. Considering the plays in such terms exposes their affinity with a fascinating array of technologies for producing, reproducing, and looking at dead things—technologies like literary doppelgängers, photography, ventriloquist puppetry, X-ray imagery, glitch art, capital punishment machines and cloning.

By situating the plays in this expansive, interdisciplinary context—one that includes current as well as developing technologies—How to Do Things with Dead People challenges many basic assumptions about linear time that organize the practice of historical periodization.

“This book is essential reading for students of Shakespeare’s English chronicle plays, but it is much more than that,” said reviewer Phyllis Rackin, PhD, professor of English Emerita, The University of Pennsylvania. “In addition to showing us radically new ways to think about those plays, Alice Dailey calls into question both the entire project of historicist literary study and the concept of time as a linear progression that subtends it.”

“How to Do Things with Dead People will be one of the most important books of the decade. Alice Dailey boldly traverses the methodological and hermeneutic boundaries that can impose artificial limits on the possibilities of much scholarship, and she utterly persuades us of ‘the imperative of thinking strangely’ as both an ethical and an intellectual matter,” says Melissa E. Sanchez, PhD, Donald T. Regan Professor of English and Comparative Literature, University of Pennsylvania. “This book raises the bar for rigorous, creative and humane scholarship.”

An expert in medieval and early modern literature, Dr. Dailey’s research interests include Shakespeare, death studies, visual art and theory, critical theory, queer and crip theory, and photography studies. In addition to many articles in peer-reviewed publications, she is the author of The English Martyr from Reformation to Revolution (University of Notre Dame Press, 2012). She received her doctorate from University of California, Los Angeles.

Dr. Dailey was recently interviewed about How to Do Things with Dead People on an episode of the New Books Network podcast.