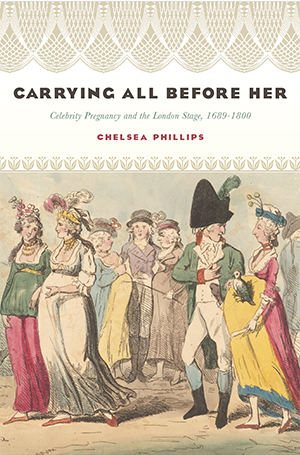 VILLANOVA, Pa. – Pregnant celebrities today attract an abundance of media coverage when sporting “baby bumps,” and they are not the first to do so. The rise of celebrity stage actresses in the 18th century created a class of women who worked in the public sphere while facing considerable scrutiny in their offstage lives, including their pregnancies. In Carrying All Before Her: Celebrity Pregnancy and the London Stage, 1689-1800 (University of Delaware Press, 2022), Villanova Theatre professor Chelsea Phillips, MFA, PhD, describes how these powerful celebrity women used the cultural and affective significance of their reproductive bodies to leverage audience support and interest to advance their career.

Carrying All Before Her uses the reproductive histories of six celebrity women of the eighteenth century to demonstrate that pregnancy affected celebrity identity, impacted audience reception and interpretation of performance, changed theatre company repertory, and altered company hierarchy. It also influenced the development and performance of new plays and had substantial economic consequences for both women and the companies for which they worked. Deepening the fields of celebrity, theatre and women’s studies, as well as social and medical histories, Dr. Phillips reveals an untapped history with a relevance and impact that persists today.

"This is an important contribution to the field of actress studies and eighteenth-century theater histories...Pregnancy is very much a key ground which needs to be covered as part of the next stage of the recovery of women's histories in the theater,” says reviewer Helen E.M. Brooks, PhD, of the University of Kent. "The quality of the writing and narrative flow is excellent, and the study is eminently ‘readable.’"

“The book's dialogues and echoes across and between different case studies—and with our own time—are significant for eighteenth-century, celebrity and theatre studies,” says reviewer Elaine McGirr, PhD, of the University of Bristol. “This is a book that has broad value and appeal.” 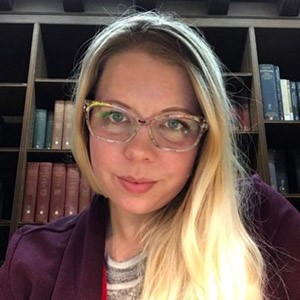 Dr. Phillips is a professional dramaturg and theatre historian whose research interests include women, Shakespeare, and the eighteenth-century theatre.  Research for Carrying All Before Her was funded by generous grants from the Folger Library, the Lewis Walpole Library, Villanova University and Ohio State University. Dr. Phillips’ work has appeared in Theatre Survey, Theatre Journal and Women's History, among others. Her article, "Bodies in Play: Maternity, Repertory, and the Rival Romeo and Juliets, 1748-1751" (Theatre Survey, May 2019) won the 2020 Gerald Kahan Scholar's Prize from the American Society for Theatre Research. She received her MFA from Mary Baldwin University/The American Shakespeare Center and her doctorate from Ohio State University.