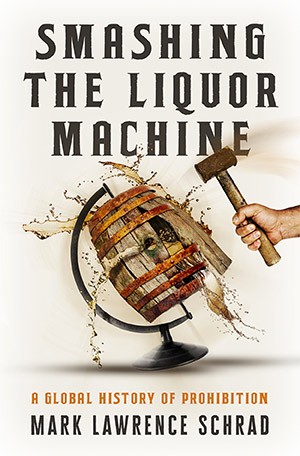 VILLANOVA, Pa. – Throughout history, temperance and prohibition have often been viewed as a largely American movement. In a new book, Smashing the Liquor Machine (Oxford University Press, 2021), Mark Lawrence Schrad, PhD, associate professor of Political Science in Villanova University’s College of Liberal Arts and Sciences, offers an international history of alcohol prohibition—redefining it as a progressive, global, pro-justice movement that affected virtually every significant world leader from the 18th through the early 20th centuries.

Smashing the Liquor Machine gives voice to minority and subaltern figures who resisted the global liquor industry, and further highlights that the impulses that led to the temperance movement were far more progressive and variegated than American readers have been led to believe. “Readers won’t look at temperance the same way once they take Schrad’s inventive and persuasive thesis into account,” says Kirkus Reviews, which gives it a starred review, reserved for books of exceptional merit.

“Infused with knowledgeable sketches of world affairs and vivid profiles of activists and political figures…this is an authoritative reassessment of a misunderstood chapter in world history,” says Publishers Weekly.

“The best book on prohibition, period. It is a revelation on the causes and nature of the Prohibition movement, and takes a properly international perspective, considering colonies and indigenous peoples as well,” writes reviewer Tyler Cowen, PhD, professor of Economics, George Mason University.

K. Austin Kerr, PhD, Professor Emeritus of History, Ohio State University, calls it “a stunning comparative history research that deepens our understanding of temperance and Prohibition as reforms directed at real problems across the globe.”

On Tuesday, Sept. 14 at 5 p.m., Dr. Schrad will give a book talk on Smashing the Liquor Machine in Villanova University’s Falvey Library Speaker’s Corner. The event is free and open to the public. All visitors to campus, regardless of vaccination status, are required to wear masks inside campus buildings.