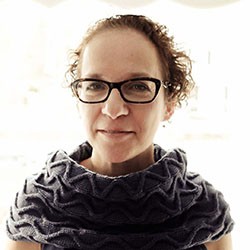 Acclaimed historian Judith Giesberg, PhD, has been appointed the Robert M. Birmingham Chair in the Humanities in Villanova University’s College of Liberal Arts and Sciences, in recognition of her path-breaking research, national reputation, and commitment to the humanities. “The humanities lie at the heart of a university education,” Dr. Giesberg believes; “they produce nimble, creative thinkers who are capable of informing the current, overlapping crises we are facing.”

A professor of American History at Villanova, Dr. Giesberg focuses her research on the experiences of civilians in the Civil War-Era North, exploring how poor families survived the war and how survivors recovered and moved on, not only from the war but also from the violence and destruction of chattel slavery. Her work has attracted broad public interest, and she has been featured in national media outlets including CBS Evening News, The Washington Post and NPR.

A leader and innovator in the field of digital humanities, Dr. Giesberg has undertaken projects that exemplify the importance of digital humanities for both fellow historians and the general public. Launched in 2017, her project “Last Seen: Finding Family after Slavery” is producing valuable resources for teachers, scholars, museum professionals, and genealogists by digitizing the information from "Information Wanted" advertisements placed in newspapers by African Americans looking for family members lost during slavery. Dr. Giesberg recently received a $100,000 grant from the National Archives and Records Administration’s Historical Publications and Records Commission to support the project.

Dr. Giesberg’s other digital research projects include “The Memorable Days Project,” which produced a transcribed and digitized version of Emilie Davis’s Civil War diary—a rare diary kept by a free Black woman—and “A Great Thing for our People,” which tells the history of antebellum Philadelphia’s premier school for African American youth, including the early civil rights activist Octavius Catto. Fall 2020 marks the beginning of “The Rooted Project,” which will take a new look at the history of Villanova, beginning with the recovery of the story of William Moulden, an early Black benefactor of the University.

“With an exceptional record of engaging students and community members in her research,” says Adele Lindenmeyr, PhD, Dean of the College of Liberal Arts and Sciences, “Dr. Giesberg exemplifies the University’s teacher-scholar model. Her appointment also underscores the central importance of the humanities at Villanova University.”

In addition to her recent grant from the National Archives, Dr. Giesberg has received grants from the National Endowment for the Humanities, the Pennsylvania Abolition Society, the American Philosophical Society and the Huntington Library. She has been a member of the Villanova faculty since 2002. She received her doctorate in History from Boston College.

About the Robert M. Birmingham Endowed Chair in Humanities

Robert M. Birmingham ’66 CLAS was a former chairman of the University’s Board of Trustees and served on the steering committee of Transforming Minds and Hearts: The Campaign for Villanova, which began in 2005 and concluded in 2007. To recognize the Birmingham family’s many accomplishments and significant commitment to Villanova, the Endowed Chair in Humanities was established in Robert’s name in 1998.