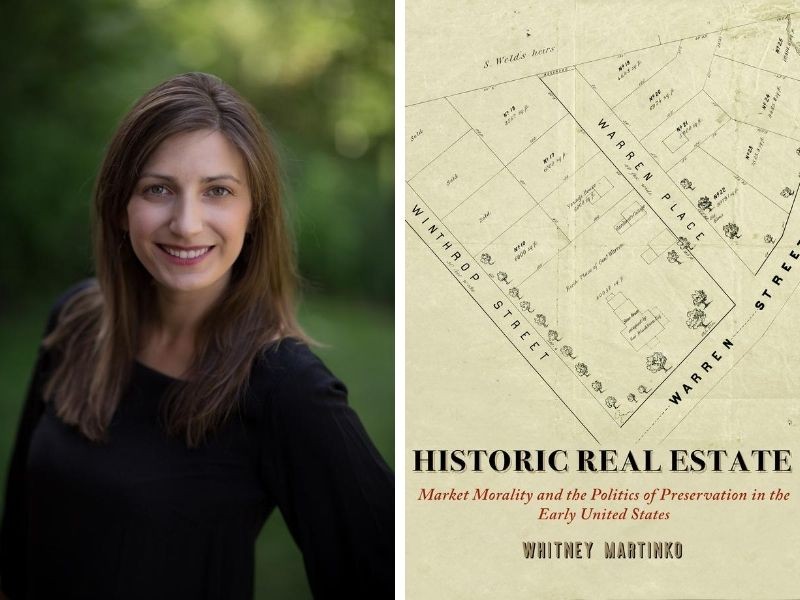 VILLANOVA, Pa. – Long before historic preservation existed as we know it today, Americans struggled to define architectural preservation as one way to work out the relationship between public good and private profit. Now a new book, Historic Real Estate: Market Morality and the Politics of Preservation in the Early United States (University of Pennsylvania Press, 2020) by Whitney Martinko, PhD, associate professor of History, offers a detailed study of early historic preservation efforts in the US between the 1780s and the 1850s.

Historic Real Estate examines how Americans in the fledgling US pointed to evidence of the past in the world around them and debated whether—and how—to preserve historic structures as permanent features of the new nation's landscape. Dr. Martinko explores how a diverse array of men and woman debated the worth of historic structures to weigh in on some of the most pressing concerns of the early nation: whether corporations really served the public good; how a seemingly pervasive “rage to be rich” affected collective economic and social stability; and what effects shifting modes of production and profit had on American families.

"With skill and great insight, Whitney Martinko reveals the centrality of the architectural past to the nation's capitalist future,” said reviewer Seth Rockman, PhD, associate professor of History, Brown University. “By steering the forces of creative destruction away from select structures, nineteenth-century Americans ultimately made it easier to shroud real estate development in the mantle of a public-spirited idealism that persists to the present day. The strength of Martinko's analysis is matched only by the production value of this lavishly illustrated volume.”

Ultimately, Dr. Martinko argues, by portraying the problems of the real estate market as social rather than economic, advocates of preservation affirmed a capitalist system of land development by promising to make it moral.

Dr. Martinko is a historian of the early US with special expertise in urban and environmental history, material and visual culture, and histories of capitalism. Her research examines how people have defined the value of historic places and objects—in the past and today. This is her first book. Dr. Martinko received her doctorate in History from the University of Virginia.