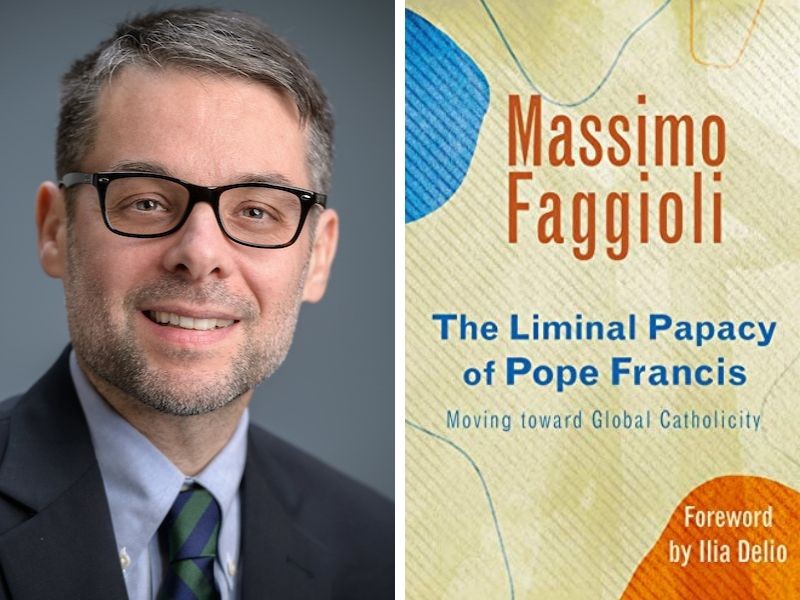 VILLANOVA, Pa. – In the more than 2,000-year history of the Catholic Church, Pope Francis is the first pope to reassess the relationship between the papacy and the bishops, and one of the first to boldly advocate for the poor from the perspective of a truly global Catholic Church. This is how Massimo Faggioli, PhD, professor of Theology and Religious Studies at Villanova University, describes today’s pontificate in his new book The Liminal Papacy of Pope Francis: Moving Toward Global Catholicity (Orbis Books, 2020). In this book, Dr. Faggioli examines Francis’ global papacy in today’s cultural and social media-driven world and unveils the importance of Pope Francis’ “liminal” papacy.

To understand Dr. Faggioli’s use of the term “liminal,” it’s important to note the concept of border is key to Pope Francis. The border is never just a limes, meaning rigid frontier in Latin, but it also always limen, the Latin word for threshold. The liminality of Francis’ pontificate lies in his reinterpretation of the borders—no boundary can claim to exclude “the other,” since the boundary, by definition, implies “the other.”

Dr. Faggioli describes Francis’ papacy as “liminal” because he purposefully focuses his work on the boundaries of traditional outreach. He is intentional in his attention to the poor, the peripheries, and the relationship between the Church and other religions. Compiled from an extensive knowledge about global politics, papal biographies, history and documents of Vatican II, Dr. Faggioli contextualizes and analyzes Francis’ ongoing papacy.

"In a single, concise, and digestible volume, Massimo Faggioli pulls off a minor miracle: a wide-angled, authoritative interpretation of the epochal shift of the Francis pontificate even while it is still in full flow” says reviewer Austen Ivereigh, author and journalist. “[Faggioli] shows Francis boldly grasping that history's turning wheels demand a new Christian inculturation, one that requires not just reform but a renewal of mindset, culture and custom. A masterful interpretation of a pivotal papacy.”

The Liminal Papacy of Pope Francis is part of a new book series, “Catholicity in an Evolving Universe,” under the direction of another Villanova professor, Ilia Delio, OSF, PhD, the Josephine C. Connelly Endowed Chair in Theology.

An expert in the papacy, Vatican II, liturgical reform, and Catholicism and global politics, Dr. Faggioli is a frequent contributor in national and international media outlets, including The Washington Post, New York Times, National Public Radio, La Croix International and National Catholic Reporter. The Liminal Papacy is his 11th book. Dr. Faggioli received his PhD in Religious History from the University of Turin in 2002. He continued his studies on the Second Vatican Council at the John XXIII Foundation for Religious Studies in Bologna, Italy. At Villanova, he teaches courses on modern Church history, Catholicism and world politics, and ecclesiology at the undergraduate and graduate level.

About Villanova University’s College of Liberal Arts and Sciences: Since its founding in 1842, Villanova University’s College of Liberal Arts and Sciences has cultivated knowledge, understanding and intellectual courage for a purposeful life in a challenging and changing world. With 39 majors across the humanities, social sciences and natural sciences, it is the oldest and largest of Villanova’s colleges, serving more than 4,500 undergraduate and graduate students each year. The College is committed to a teacher-scholar model, offering outstanding undergraduate and graduate research opportunities and a rigorous core curriculum that prepares students to become critical thinkers, strong communicators and ethical leaders with a truly global perspective.