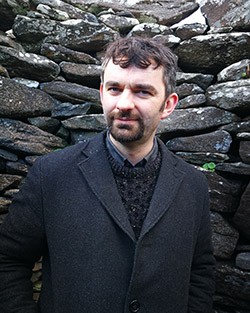 VILLANOVA, Pa. – Villanova University has selected acclaimed Irish filmmaker Maurice Fitzpatrick as the 2020 Charles A. Heimbold Jr. Chair of Irish Studies in its College of Liberal Arts and Sciences. This year’s visiting writer-in-residence offers Villanova students the opportunity to learn how to critically assess the world around them from a filmmaker known for doing just that.

Fitzpatrick, an Irish film director and author, attended Trinity College Dublin. He has directed two BBC documentaries: The Boys of St. Columb’s and Translations, and in 2017, he wrote, directed and produced the documentary feature film, In the Name of Peace: John Hume in America—later authoring a book of the same title. Fitzpatrick will read from his 2019 book, John Hume in America: From Derry to DC (Irish Academic Press 2017/Notre Dame 2019) and discuss new film projects on Thursday March 12 in the Presidents' Lounge, Connelly Center, with a reception at 6 p.m. followed by the lecture at 7 p.m.

John Hume, a former politician from Derry, Northern Ireland, is widely considered the architect of the Northern Ireland peace process and is a co-recipient of the 1998 Nobel Peace Prize. In the film, Fitzpatrick chronicles Hume’s rise from the riot-torn streets of Northern Ireland to his work with American presidents and the United States Congress to leverage US support for peace in Northern Ireland.

Hume focuses on paradoxes in geographical regions—like Northern Ireland—that happen when many cultural traditions converge. John Hume in America depicts these paradoxes through its portrayal of one of Northern Ireland’s most influential politicians. Known for his many talks with both American and Irish American leaders, Hume worked to help forge peace during the Irish Troubles by listening to dialogue and the paradoxes of experience. The documentary features never-before-seen archival footage of interviews with John Hume and other prominent American, British and Irish politicians—including Bill Clinton, Jimmy Carter, Tony Blair, John Major and Bertie Ahern.

Deeply influenced by the countryside of his hometown Belturbet, just south of the Irish border, Fitzpatrick believes that setting is a fundamental factor in filmmaking since places are imbued with both physical and historical identity. The River Erne runs through Belturbet and was intentionally prominent in his Hume documentary.

“The Irish border at certain points lies exactly on that river. So historically, it is a contested place, a site of sorrow as well as beauty,” he says. While serving as the Charles A. Heimbold Jr. Chair of Irish Studies, Fitzpatrick will teach a course on Irish and British films in political contexts, concentrating on Anglo-Irish relationships through documentaries, as well as a course on constructing the Irish nation through film. In addition to the March 12 event, Fitzpatrick will discuss his 2013 BBC documentary, Translations Revisited, on Wednesday, April 15 at 6 p.m. in the East Lounge, Dougherty Hall.

About Villanova University’s Center for Irish Studies: The Center for Irish Studies at Villanova University has been a leader for four decades in interdisciplinary teaching and scholarship on Ireland in a global framework. The Center connects students to local community organizations while also preparing them to become citizens equipped to take on the world’s most pressing challenges. Through liberal arts-focused academics, multi-disciplinary scholarship and key partnerships, the Center provides students with research, study abroad and employment opportunities.