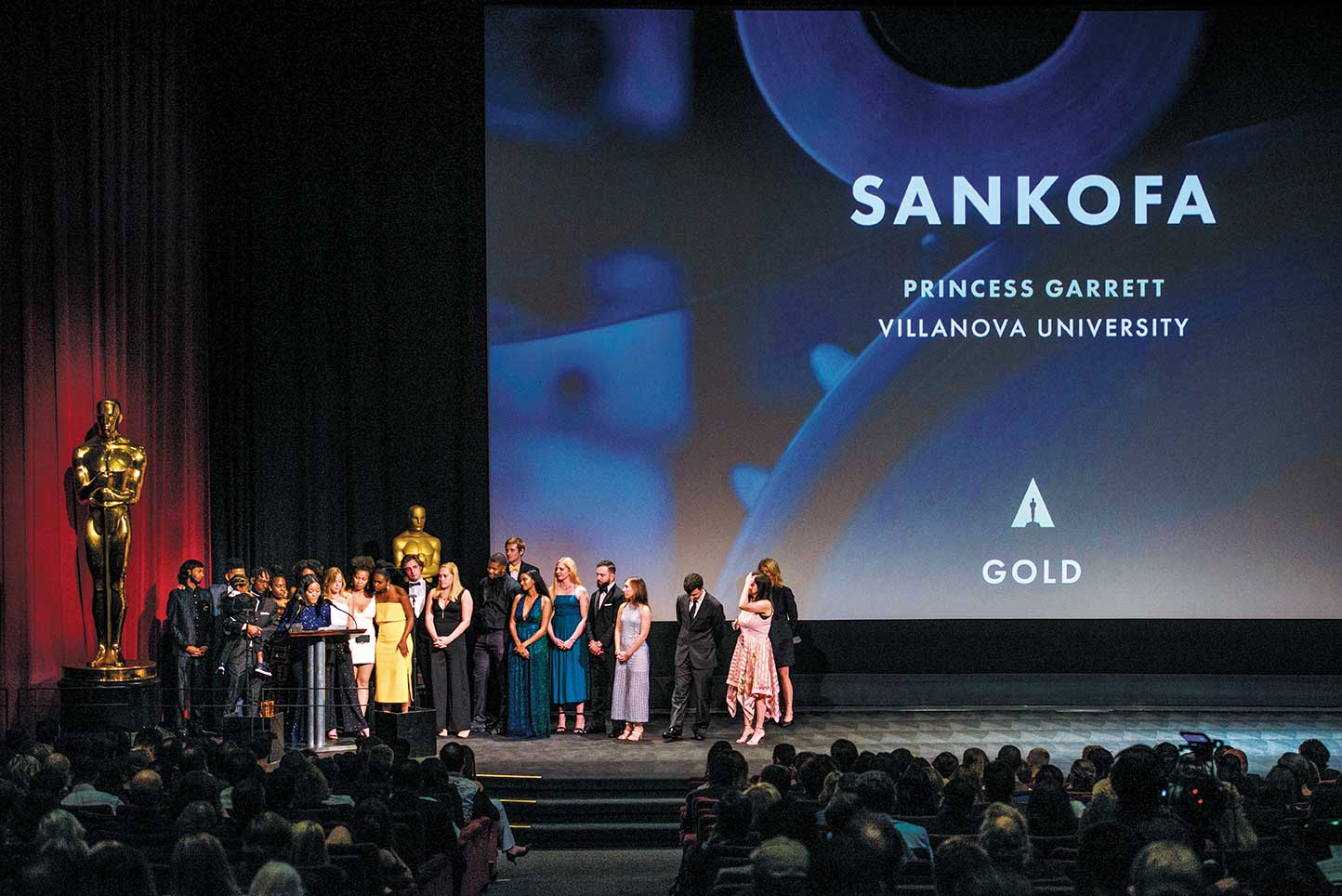 And the Oscar goes to … For the first time in University history, students at Villanova were honored not only with a Student Academy Award, but even more impressive, the top prize of a gold medal at the event, now in its 46th year.

One year in the making, Sankofa: A Poetic Journey of the Black Male’s Experience, tells the story of the loss of African identity and its negative systemic impact on black males across the world.

As part of a Social Justice Documentary course taught by Hezekiah Lewis, MFA, ’99 CLAS, ’02 MA, assistant professor of Communication, 21 Villanova students formed the production company Riptide Pictures and poured their hearts and souls into their roles as filmmakers over the course of two semesters. “I always knew Sankofa was going to be special,” says director Princess Garrett ’18 CLAS. “The emotional feelings I had while watching it, I knew other people would be affected and empowered, too.” 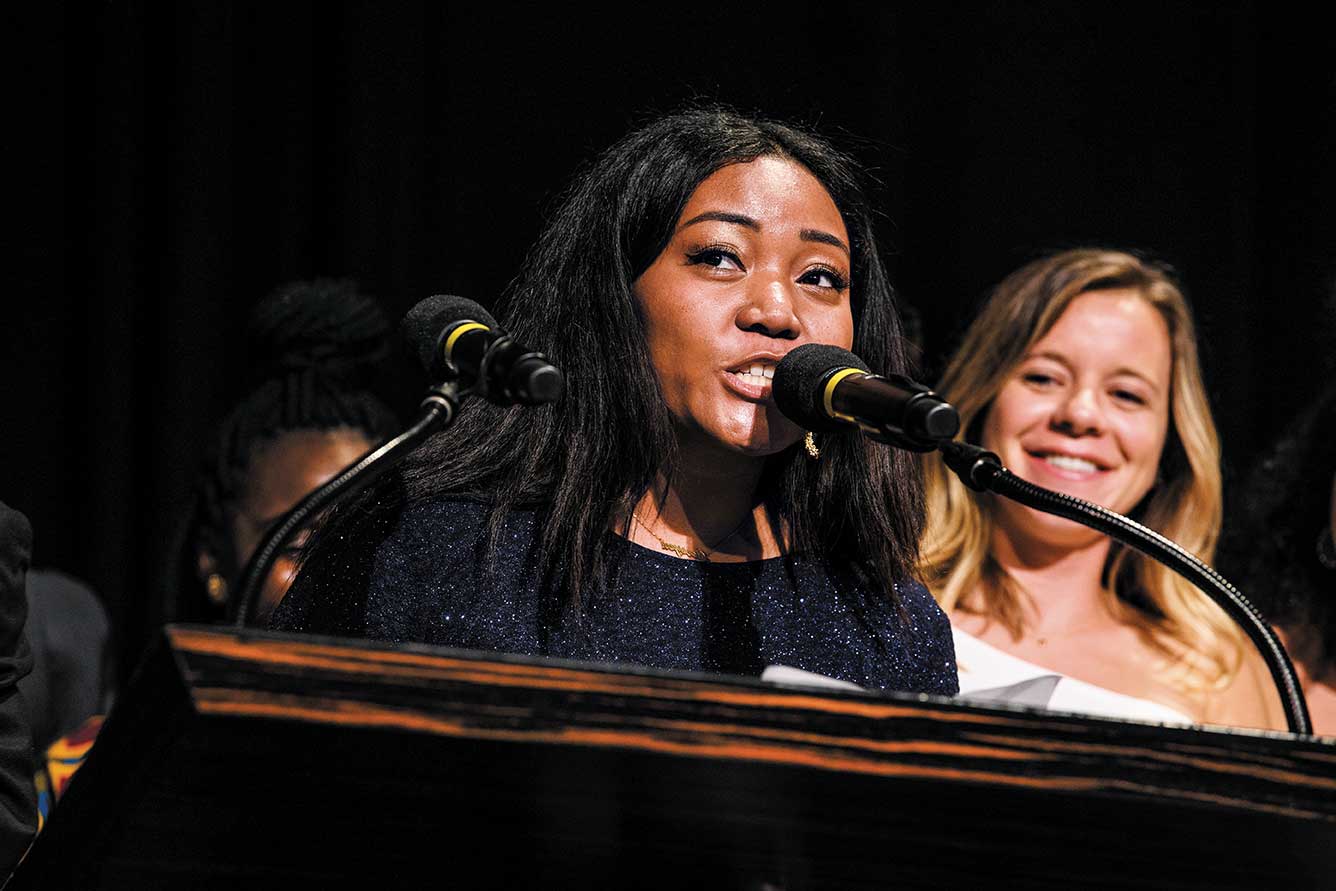 Director Princess Garrett '18 CLAS accepts the award on behalf of the 21 Villanova students who created and produced the film.

The documentary, which was shot on location in Ghana and the United States during the fall of 2017, explores the complexities and parallels between the US and Ghana—specifically, focusing on a disconnect between two young male community leaders in both countries—in order to illuminate the prevalence of mental slavery.

The title, Sankofa, which means “go back and fetch it” in the Ghanaian language of Twi, hit home with Caleb Lucky ’20 CLAS, who was the film’s composer and co-editor (with Sarah Davis ’19 CLAS). “Africa has been shown to me in a certain light that made me not want to go and learn my own history,” he says. “But going there changed my whole outlook, and I came to understand that the history of Ghana is American history.” 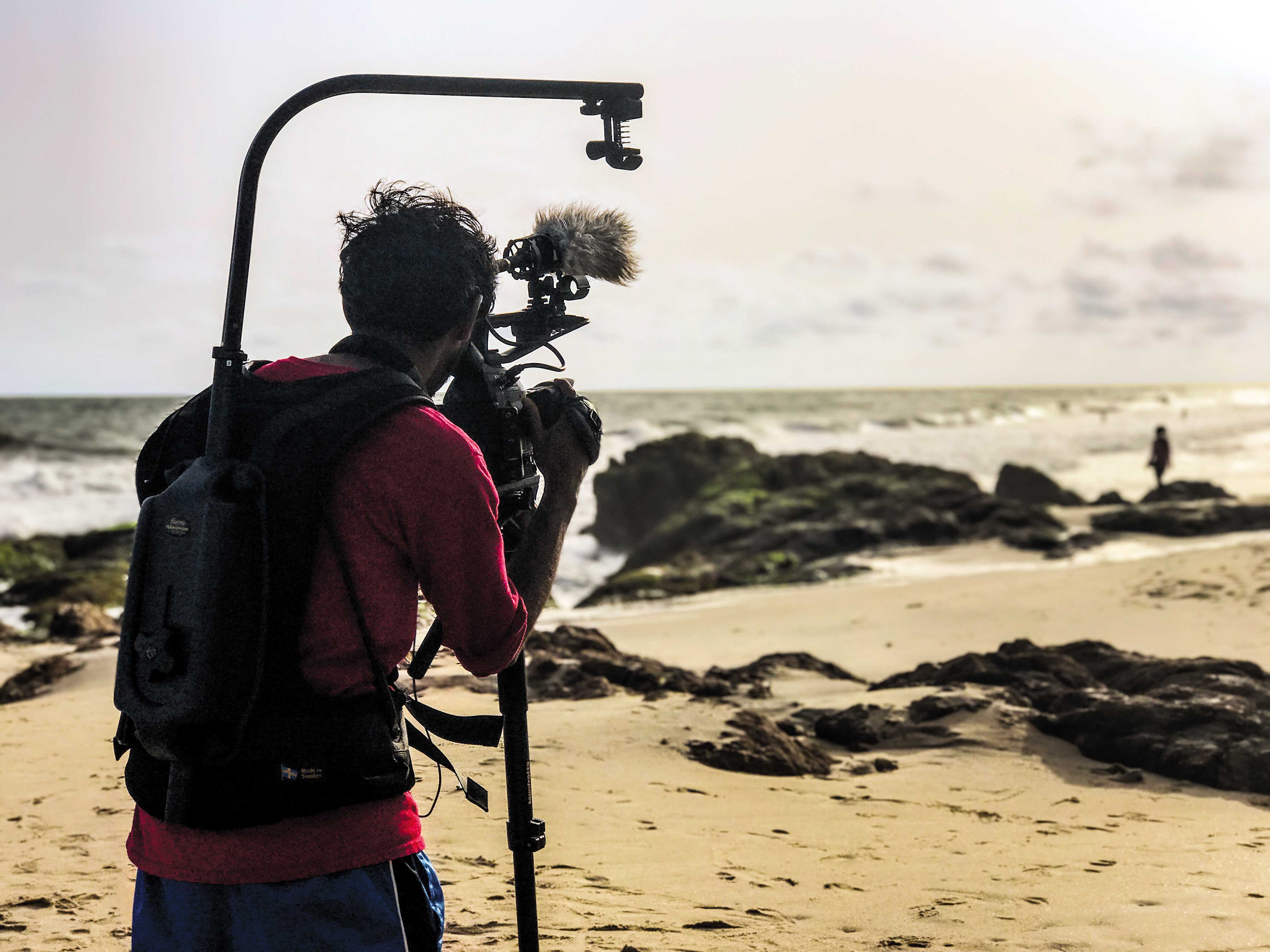 The film was shot partially on location in Ghana.

Sankofa was one of 16 winners selected from more than 1,600 entries from across the globe. It’s not the first time Villanova University has been selected as a Student Academy Award finalist for one of its films in the documentary category; in fact, it’s the fourth. In 2014, Heel’d earned a finalist spot, and the following year, Rise and Shine and In Transition: Tony Chennault were also recognized for being among the nation’s best student-produced films.

Now, more than two years after enrolling in Professor Lewis’ documentary film program, the student filmmakers of Riptide Pictures continue to receive accolades, with Sankofa being officially selected for more than 20 film festivals worldwide. As new audiences engage with Sankofa through distribution to schools, libraries and streaming sites, Caleb hopes they watch, he says, “with an open mind and heart and that they are willing to talk about the issues that black people face in America.”

Villanova students continue to shine a light on important social issues in their films through the Communication Department’s Social Justice Documentary course, which is made possible with the support of Villanova’s Waterhouse Family Institute for the Study of Communication and Society.

“This is not your typical class. We’re collaborating on films that could essentially change a whole way of thinking. Through the art of storytelling, we’re getting an audience to sympathize with someone they might not otherwise,” says Caleb Lucky ’20 CLAS.

Upcoming documentaries include From the Ground Up, a project in association with the Chris Long Foundation that explores the issues of lack of access to clean water in East Africa, specifically Tanzania, where students spent two weeks filming. A second Villanova film tackles a topic closer to home, exploring the transition that three veterans face returning to “ordinary” life.

“It’s not just a typical documentary. Sankofa has a unique style—it’s a performance with poetry, music, chapters. It’s just different than anything I have ever seen before.”

Leading the Charge in Technology