A Divine Calling: Helping the Most Vulnerable Populations 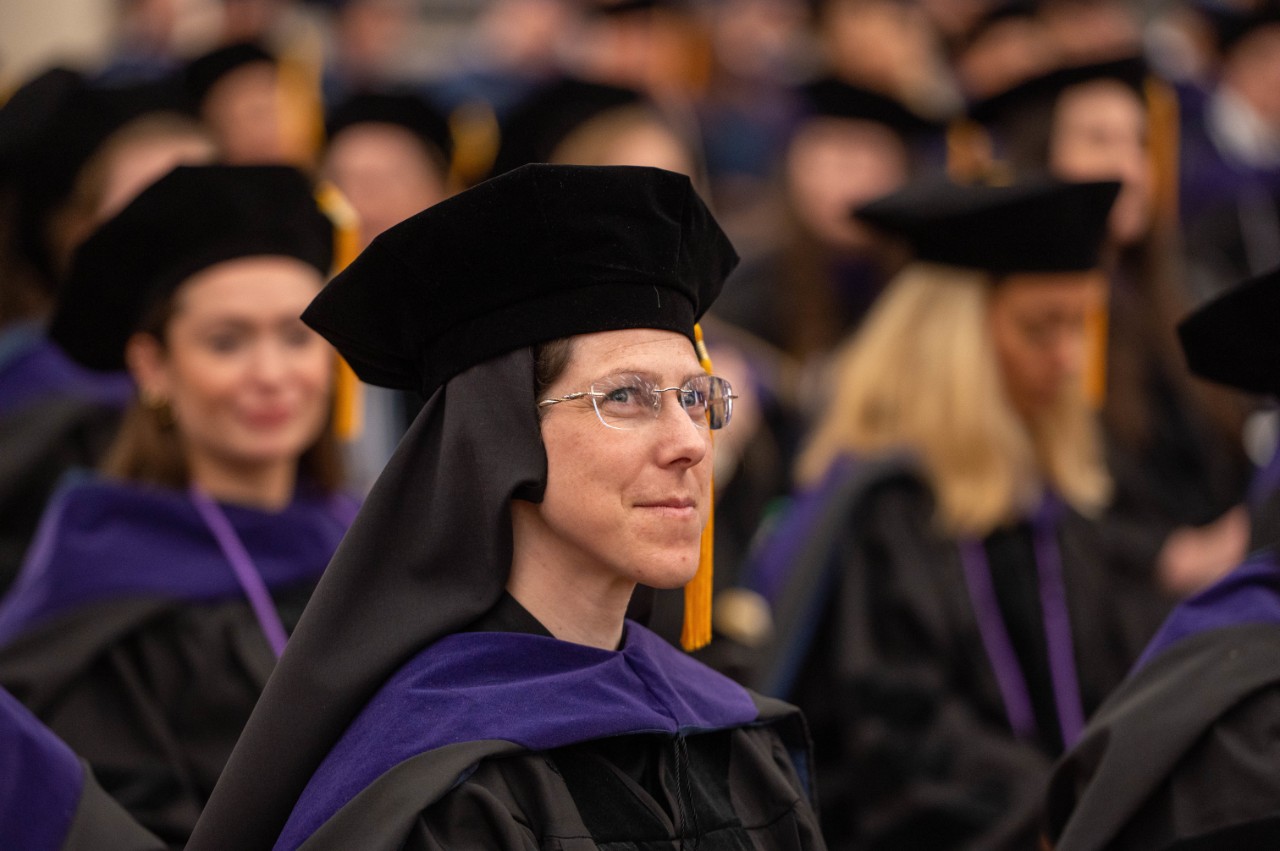 Sister Brigid Mary Meeks ’22 was not a typical law student. A member of the Religious Sisters of Mercy of Alma, Michigan, Sister Brigid Mary always knew she wanted to attend law school, but once she realized her true calling was to religious life, the path to becoming a lawyer wasn’t as clear.

A native of Denver, Colorado, Sister Brigid Mary attended Davidson College in North Carolina for her undergraduate degree. Davidson awarded her a Division I soccer scholarship, and she focused on excelling in soccer and her studies. She was raised Catholic but didn’t practice her faith in college. The summer after her junior year, Sister Brigid Mary held a legal internship with BLC International Law Firm in the Republic of Georgia. Stunned and saddened by the magnitude of poverty in Georgia, she found herself homesick and trying to escape the devastating reality.

After seeking comforts that reminded her of home, she couldn’t shake the sorrow she was experiencing around her. “Finally, I asked my host family to take me to Mass,” said Sister Brigid Mary. “I was looking for a place where I could be home. The priest stood up for the homily and said, ‘I was the pastor here during Soviet rule. I watched a comrade soldier come to every Mass and take down names of people in attendance, and we knew that when he left, they would go home to ransacked apartments, and they might go missing. Yet, every Sunday the pews were filled, and for those who didn’t come back to Mass, it wasn’t because they didn’t want to, but because they couldn’t. Somebody died to sit in the pew you’re sitting in—what are you doing with your faith?’”

This simple, yet thought-provoking question, proved to be a defining and life-changing moment. After the internship, Sister Brigid Mary returned to Davidson for her senior year, but a slow revolution had begun. “There was a restlessness in my heart that I couldn’t stop,” she said. “The feeling I had in Georgia followed me home. The things that were great before weren’t the same. I needed more now.” In 2009, she graduated with her BA in Early British Literature and Honors English and planned to take a year off to study for the LSAT and apply to law schools.

During her gap year, she went to daily Mass and started to question her changing identity. “For the first time in my life, I asked the Lord who I was, and I heard back very clearly, ‘you are mine,” said Sister Brigid Mary. “From there, I gave up the idea of law school. I started exploring the idea of Religious Life, and I didn’t ever think law school would be back on my radar.”

Eventually, her search led to the Religious Sisters of Mercy of Alma, Michigan, whom she joined in 2013. “In addition to vows of poverty, chastity and obedience, our community professes a fourth vow of service of the poor, sick and uneducated,” said Sister Brigid Mary. “We interpret that fourth vow to be that each sister gives fully of her body, spirit and mind to the Church, and every sister is educated to a terminal degree. When I first learned of the Order’s dedication to education and using it to serve the Church, every door in my heart flew open. I knew I had found my home.”

In 2015, through the Sisters of Mercy, Sister Brigid Mary was assigned as the coordinator for the Department of Religion at Saint Francis Health System in Tulsa, Oklahoma. In this role, she served as a leader of the health system’s ethics committee, working closely with the board of directors and leading doctors on policies and issues at the intersection of medicine and ethics. “I found that I truly loved healthcare administration,” she said. “My community and I discerned that if I wanted to continue to work in healthcare ethics and Catholic healthcare administration, I needed to get a formal education in that area, which is how law school was put back on the docket.”

Sister Brigid Mary pursued a master of science in Bioethics, graduating from the University of Mary in Bismarck, North Dakota in 2019. At the same time, she took the LSAT and applied to law schools. “Villanova was an obvious choice,” she said. “As an undergrad, I was heavily recruited by Villanova to play soccer and I felt a connection to the school even though I ultimately went to Davidson. I loved Villanova, and that love stayed with me.”

In fall 2019, Sister Brigid Mary began her law school career. “If I had to explain Villanova Law in one word, it would be caring,” she said. “And not just the emotive caring, but the fullness of caring. Caring for the intellect of the person and caring for the full comprehensive person. From day one, Villanova Law was an intellectual home for me. I was totally supported, by faculty and administration, to explore my interests, whatever they were and wherever I was called.”

While at Villanova Law, her interests surprised her. “I went to law school for health law, but I found that I loved criminal law, and I saw an overlap between the two,” said Sister Brigid Mary. “We learned about human trafficking in criminal law, and the way I see it, there are only two ways a person who is being trafficked, or is in prostitution, is found in the system—either in the healthcare system or judicial/criminal system.”

Reflecting on her work at Saint Francis in Oklahoma, Sister Brigid Mary knew there was nothing in their health system to prepare staff on how to treat and serve this unique patient population. She saw this lack of training and programming as an opportunity to create new policies to offer fine-tuned care to people involved in human trafficking and prostitution. Working closely with Villanova Law Professor and criminal law expert, Michelle Madden Dempsey, as well as The Villanova Law Institute to Address Commercial Sexual Exploitation (CSE Institute), Sister Brigid Mary created a proposal for Saint Francis Health System for a Human Trafficking Response Program.

“The creation of this program became my main focus,” said Sister Brigid Mary. “My law school courses and professors opened my eyes to this issue, and I knew this program could make a difference at Saint Francis Health System. The summer after my 1L year, I interned with the general counsel at Saint Francis, part of which included pitching the Human Trafficking Response Program idea to the executive committee and the board of trustees. I eventually got the green light from Saint Francis. They were willing to take this on and become a leader in the Oklahoma community for responding to human trafficking victims.”

During her 2L year, Sister Brigid Mary continued to work with the CSE Institute and Professor Dempsey to develop procedures and policies for the Human Trafficking Response Program. They also analyzed Oklahoma law and how it can overlap in healthcare. She returned to Oklahoma during her 2L summer to focus on a policy to respond to the existing patient population and creating trainings for discharging patients who are ready and able to accept help in escaping prostitution and human trafficking. “As they leave the health system, we want to connect them with resources and help so they can start to rebuild their lives,” she said. “There are some resources in Oklahoma, but it’s not enough. In time, the long-term idea is that my Order, the Religious Sisters of Mercy, will have a safe home in collaboration with Saint Francis to provide temporary housing for victims who are transitioning to a new life. We also plan to create an occupational rehabilitation café where past patients can get occupational training and build a resume to set out on their own.”

This summer, Sister Brigid Mary returns to Oklahoma as a graduate of Villanova Law. Her next step is the implementation and rollout of the new Human Trafficking Response Program at Saint Francis Health System, which will become a resource for some of the neediest and vulnerable populations in Oklahoma. “The whole health system is excited and ready to take on this new work, and it will be my main focus for the next year.” She plans to take the Oklahoma Bar Exam in February 2023.

In August 2023, Sister Brigid Mary will begin a prestigious two-year judicial clerkship with the Delaware Court of Chancery. “I took a business organizations class with Professor Jennifer O’Hare and I loved it. My mind and my heart clicked with it, and Professor O’Hare encouraged me to apply for a clerkship position. It was so out of the blue and a totally outside-of-the-plan suggestion, but that’s when I pay the most attention. It seemed to be a divine intervention through Professor O’Hare. I never thought I would work in corporate law, but I am thrilled to have this opportunity.”

Wherever life takes Sister Brigid Mary, she will always have a Villanova Law network supporting her along the way. “I met good, lifelong friends at Villanova,” she said. “There was such a sense of camaraderie. We were there to support each other, and we were all part of this caring community.”