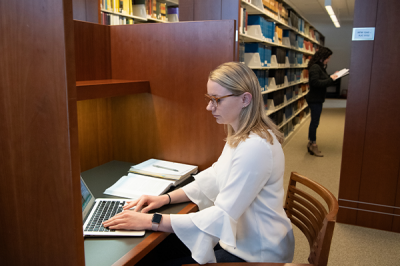 As a first-generation college graduate and law student, Thallia Malespin ’19 didn’t know what a judicial clerkship was when she arrived at Villanova Law. A presentation by the Office of Career Strategy and Advancement, along with encouragement from her professors, helped her see that clerking for a judge could be an ideal first step for her career. “I realized that these judges could be incredible mentors,” she said. “To have someone in my corner like that was very appealing to me.”

“You really get to hit the ground running, seeing cases and litigation happen right before your eyes—something you otherwise wouldn’t see as a recent graduate,” Malespin said. “You hone your writing and critical thinking skills and get to build a rapport with a judge who has so much knowledge—and you gain exposure to every type of case out there.” Next year, she plans to join a boutique litigation firm in Houston where all of the attorneys are former clerks themselves.

Judicial clerkships give recent law graduates a front-row seat to how judges handle cases in trial and appellate courts, whether at the state or federal level. But clerks aren’t just watching—they are participating actively by assisting the judge with research, writing opinions and handling tasks that keep the court running smoothly.

Over the past decade or so, the number of Villanova Law graduates pursuing clerkships has risen sharply, with roughly 35 to 45 graduates going directly to clerkships in 2019 and 2020 (numbers vary year to year). According to Sharon Buckingham, Associate Director of Career Strategy, there’s a reason for the uptick: The office has built greater awareness of clerkships through its Professional Development Program, which includes a first-year class on judicial clerkships and a second-year class on state court clerkships. There are also presentations and panel discussions where alumni share their clerkship experiences, and students have access to a running list of former clerks they can contact for advice on how to apply for—and land—a clerkship.

It's an intensely competitive process, especially for clerkships at the federal and appellate levels. Judges are looking for the best and brightest law graduates, who in turn are seeking experiences that will make them stand out as candidates for future jobs.

“Law firms tend to support and encourage clerkships either right from graduation or a year or two out,” Buckingham said. “They are so valuable because clerks gain a good understanding of what judges are looking for and how they view cases. When you’ve had a clerkship, you can get your foot in the door for some very prestigious practice opportunities.”

Although clerkships are considered excellent preparation for litigation and academia, she noted that they’re also great preparation for government, transactional law, criminal law, public interest, and working in a wide range of law firms.

Lindsay Burrill ’20, who aspires to a career in public interest law, spent her first year after law school as a clerk for The Honorable James Ferrelli in the Superior Court of New Jersey in Burlington County. “He’d been newly transferred to civil court from family court, so I worked with him to develop his entire system for handling cases, which was a great experience,” Burrill said. “I did a lot of writing to help him prepare for motion hearings, and I handled administrative tasks such as scheduling oral arguments and managing motions.” In September 2021, she started a federal clerkship with The Honorable R. Barclay Surrick in the United States District Court for the Eastern District of Pennsylvania, where she spends most of her time researching and writing opinions.

Chris Merken ’20, who wants to work in litigation, landed two federal clerkships during his second year of law school. Right after graduation, he clerked for The Honorable Madeline H. Haikala in the United States District Court for the Northern District of Alabama in Birmingham. He’s now back in Philadelphia doing a clerkship with The Honorable Jane Roth in the United States Court of Appeals for the Third Circuit. He described both as “research- and writing-intensive,” but the nature of the work varies. “In district court, I often oversaw cases through the entire civil litigation life cycle, from initial filing or removal from state to federal court through motions practice, trial and post-trial motions,” he said. “On the appellate court, you have a record that includes an opinion from a district court judge. You’re essentially deciding whether to recommend agreeing with that judge or not agree.”

It’s all valuable experience for recent law graduates—and that’s what Villanova Law’s career advisors and faculty mentors try to convey to students. “What we do with professional development and career advising is really help the students self-assess, ‘What am I good at and why?,’” Buckingham noted. “And we’re making sure that every single one of them has judicial clerkships on their radar. We want everyone to consider the opportunity and understand what it offers.”

The Career Strategy office also helps students understand how to be competitive candidates, which includes not just strong academics but demonstrated writing and trial experience through activities such as journals, faculty research assistant positions, internships and Moot Court. Students also learn how to research judges and prepare for interviews with any judge who is considering them for a clerkship. And the Villanova Law alumni network of former clerks continues to grow, which is another plus.

“These alumni are not only serving as resources for our students,” Buckingham said, “but they’re really paving the way for more students to earn these clerkship positions.”