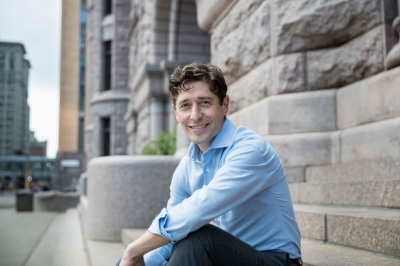 Minneapolis, Minnesota Mayor Jacob Frey ’09 always knew he wanted to be involved with community and social justice issues. It was a calling that originally brought him to study at Villanova Law and eventually led him to run for Mayor of the City of Minneapolis.

Born and raised in Oakton, Virginia, Mayor Frey attended the College of William & Mary on a track scholarship. He graduated in 2004 with a BA in Government and received a contract from a shoe company to run professionally for Team USA. While pursuing his running dreams, Mayor Frey also set his sights on law school. “I knew that I wanted to be incessantly involved with social justice and specifically communities experiencing homelessness,” he said.  “And you find, regardless of whatever endeavor you are entering, there is an inevitable blockage if you don’t understand the law. You can’t help people if you don’t understand the law, so that led to my decision to go to law school.”

Mayor Frey’s focus on immersing himself in community drew him to Villanova Law. Beginning on his first day at Villanova, he made strong connections with fellow classmates that continue to this day. “There was an immediate sense of belonging, perhaps in part due to the Augustinian tradition that runs through and through everything that Villanova does, and you can feel that,” he said. “The Augustinian tradition of community and partnership was drummed into us from day one.”

When he wasn’t studying or running, Mayor Frey was involved with the Villanova Law Democrats. He also formed strong relationships with faculty. “Professor Ruth Gordon was our Contracts professor and she had an indelible impact on my ability to think like a lawyer,” he said. “Logic and reasoning and so many of the tools that I use today are certainly based on concepts of mutual promises and expectations that I learned from her class.”

During his 1L year he raced the Twin Cities Marathon in Minneapolis-St. Paul and fell in love with the area. When it came time to search for a full-time legal position after graduation, he looked in Minneapolis in addition to the big East Coast cities like Washington DC, Philadelphia and New York, ultimately landing a position with Faegre & Benson (now Faegre Baker Daniels) in Minneapolis to practice employment and civil rights law.

The day after graduation from Villanova Law, Mayor Frey drove to Minneapolis to begin his career, but not before delivering the student address at the 2009 Villanova Law commencement. Selected by his peers to speak at graduation, Mayor Frey focused his address on inspiring his fellow classmates who were starting their legal careers during the financial crisis. “It was perhaps the worst time to graduate law school ever, but we had a great class, and I knew we were up to the challenge,” he said.

As soon as he arrived in Minneapolis, he got involved with different community organizing endeavors, including the push for marriage equality and advocating for those experiencing homelessness, helping tenants who lost their homes in North Minneapolis. In 2013, he successfully ran to represent the Third Ward on the Minneapolis City Council.

“Professor David Caudill was especially helpful to me during my city council years,” said Mayor Frey. “I used a lot of what I learned from him in Property to help inform me on the city council. I still keep in touch with him from time-to-time today.”

A legal case Mayor Frey worked on ultimately inspired him to run for mayor. “It was a post-conviction death penalty case, and the man who was on death row was exactly my age and had done relatively well in school. He was black and he grew up in Houston County, Alabama, which has very high death penalty rates. I was very passionate about the case and I knew race played into it. It sparked an interest and an obligation in me to do something and help.”

In 2017, Mayor Frey announced his candidacy for mayor of Minneapolis. “My friends who worked with me on the various causes I was a part of became my campaign team,” he said. He won the election in November 2017 and on January 2, 2018, at only 36 years old, he was sworn into office. He is Minneapolis’ second youngest and second Jewish mayor.

As mayor, Frey uses his law degree daily. “The ability to think like a lawyer is helpful in so many different areas, and I use those skills every single day,” he said. “Villanova did a particularly good job at training me to think like a lawyer and to understand not just the conclusion, but causal connections, those factors that lead you to particular decision. And also, the willingness to play devil’s advocate which I do to my staff’s chagrin all the time. I like to think, ‘So what’s the opposite side that maybe we aren’t considering?’”

Perhaps most meaningful is the Villanova Law network that he still relies on as mayor. “Some of the friends I met on my very first day at Villanova Law still help me today,” said Frey. “One former classmate in particular I call now and again when I am working on delivering a specific message. He works for a New York firm and I know he will give me an honest outsider’s perspective. I value his opinion and advice, and it’s so helpful to me.”

Mayor Frey was reelected in November 2021.