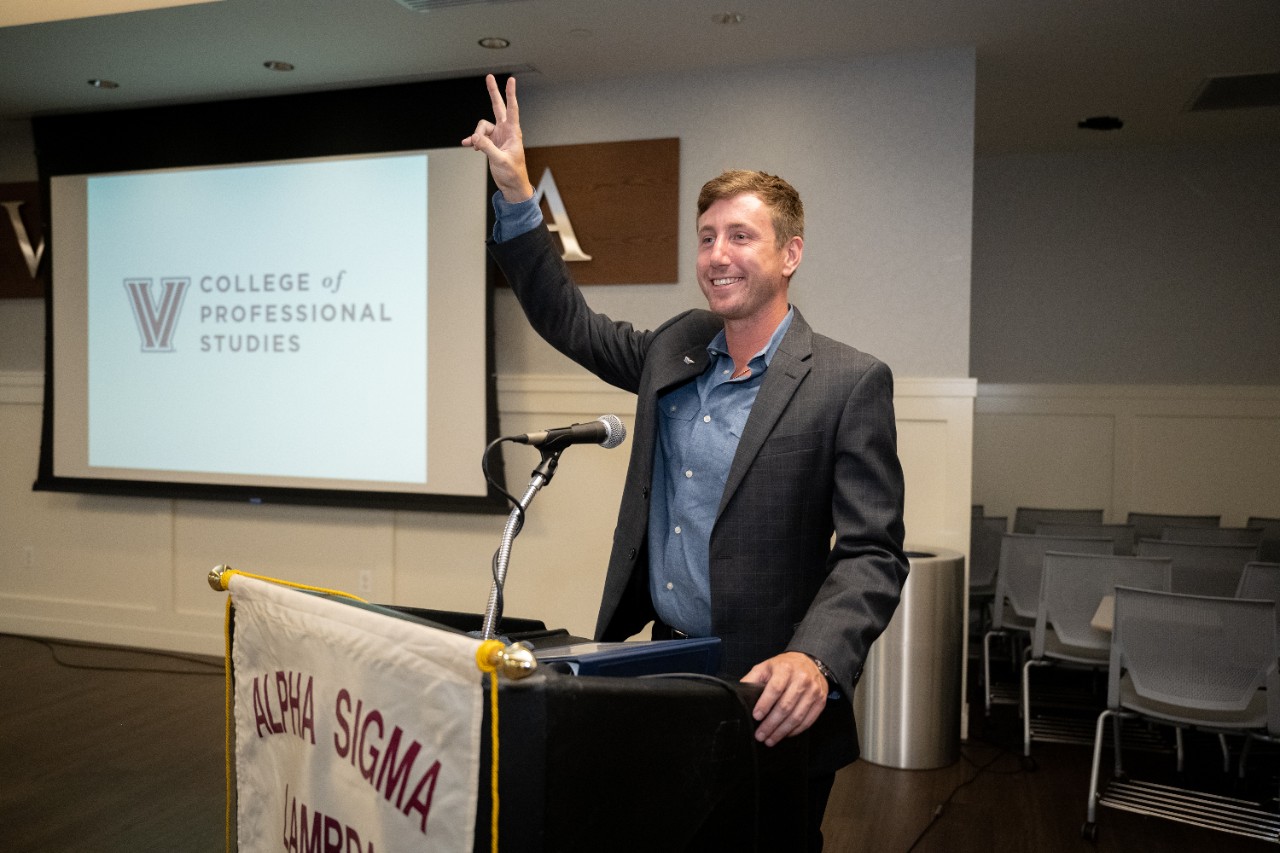 Ryan Oakley ’21 CPS is the type of person you speak to, even for a short time, and you can just feel his passion to change the world. In small ways, in big ways, in all the ways.

Graduating this May with a bachelor of interdisciplinary studies in organizational development and management, Ryan now has the educational foundation, the skills and the network to fuel his passions. An excellent student, Ryan was named the student speaker at this year’s CPS Annual Awards Dinner, which recognized and honored him and all of his fellow graduates.

Ryan’s story starts back in 2011 when he started at Villanova as a traditional undergraduate student. Coming from Saint Augustine Prep in New Jersey, he already held the Augustinian values of Veritas, Unitas and Caritas (Truth, Unity and Love) close to his heart. He enjoyed three years at Villanova, but left before completing his degree to help support a technology startup called Traction in Philadelphia. He worked as a project manager and creative lead with a mission to harness the power of the video content network within Philadelphia. This first venture with Traction then led to a move down to Tampa Bay, Florida where Ryan created his own app called Sliphook. His experience in building content and working with clients along with his love of software development helped him bring this idea to life. In Ryan’s words, “The premise behind Sliphook is that you’re able to follow fishing guides for free content, as well as to book a trip with them and then share the experience with other anglers and users of the app.” Over the next couple of years Ryan honed his software development skills and was able to develop a beta version of the app, which he took to six tradeshows and received great feedback and insights.

In a serendipitous meeting while Ryan was still living in Florida, he walked into a local shop wearing a Villanova t-shirt and was greeted by a Charles Widger School of Law professor who happened to be in Florida working with Habitat for Humanity. By the end of the conversation, the professor had recommended to Ryan that he think about coming back to school and asked if he had heard of the College of Professional Studies. This chance meeting got Ryan thinking about completing his degree, and he felt like he was in a place where he could really bring something valuable back to Villanova. He had completed a difficult and intense coding certificate, he was finding success with Sliphook and was excited about the future of the app, so he was almost ready. Shortly after that encounter, the pandemic took hold across the globe and Ryan’s Mom was diagnosed with cancer. He moved back home and put Sliphook on hold to fulfill a promise he made to his Mom, which was to finish his degree. Sadly, Ryan’s Mom passed away before she saw him graduate, but her influence and her passion for philanthropy that she demonstrated throughout Ryan’s life lit a new fire in him. A fire that led him to create the Lisa Oakley Memorial Foundation, a foundation that has a goal of raising $10 million dollars within 10 years, in addition to establishing and launching “The Blast,” a signature annual event modeled around the Gala Ryan’s Mom ran for many years at Saint Augustine Prep.

Ryan is graduating after an overwhelmingly positive experience coming to Villanova as an adult student. He says, “What Villanova has done is enabled me and my classmates to take all of our experiences and knowledge into the classroom and discuss it, mold it, learn new things which we’re then able to apply immediately. That loop is so important. It’s provided me with confidence, new skills sets and really just a lot of energy as I set about my next goals.”
Ryan’s Sliphook app is about 100 software development hours away from being live in the App Store, which should happen in July 2021. He has an opportunity to work full time for the New York Yankees, which he is hopeful will come to fruition over the summer. He’s also planning a golf outing for the Lisa Oakley Memorial Foundation and is being mentored by Pelotonia, an organization established in 2008 with the objective to fund innovative cancer research through a three day experience that includes cycling, volunteerism and entertainment.

“When I’m heavily involved in things I’m passionate about and I’m able to perform, everything else seems to fall in line.” Fall in line, indeed. Keep inspiring, keep aspiring, Ryan! Pursue the Next You!