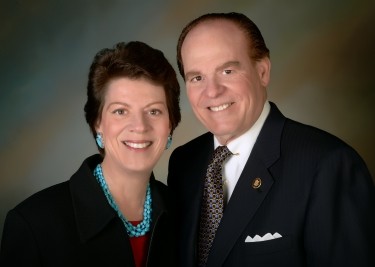 Ambassador David and Constance Girard-diCarlo have had a significant impact on corporate, legal, political and civic affairs during their careers. Both Villanova Law alumni, each has made a major mark in their respective fields.

Constance B. Girard-diCarlo was a successful lawyer and executive in the service industry, having held numerous senior management positions throughout her 25-year career with Aramark Corporation. She joined Aramark, a multi-billion dollar service management company headquartered in Philadelphia, as an assistant general counsel in the legal department following her graduation from Villanova University Charles Widger School of Law in 1974. In 1981, she moved into a management role as a vice president in Aramark’s Campus Services division; in 1986, she became president of the School Support Services division. From 1990 until her retirement in 1999, Mrs. Girard-diCarlo was president of the Healthcare Support Services division, which managed non-clinical support service departments for institutions in the acute care and continuing care segments of the healthcare market. The division served 250 client facilities nationwide, managed 18,000 employees and oversaw client department budgets totaling in excess of $700 million annually.

Mrs. Girard-diCarlo was active in numerous civic, professional and corporate organizations. She was a member of the boards of The Day & Zimmermann Group, Inc., a global provider of diversified professional, technical and consulting services; EnergyNorth, Inc., a public utility holding company; and The Multicare Companies, Inc., a provider of high quality long-term care and specialty medical services. She served on the boards of Widener University, The Franklin Institute, The Free Library of Philadelphia Foundation, United Way of Southeastern PA  and The Lensic Performing Arts Center. She was chairman of the Corporate Advisory Council for the Girl Scouts of Southeastern Pennsylvania, having also served on the GSSEP board of directors.

Mrs. Girard-diCarlo was the recipient of Widener University School of Management's Distinguished Performance in Management Award. The Pennsylvania Department of Community and Economic Development named her one of Pennsylvania’s Best 50 Women in Business, and she was the recipient of the Philadelphia Forum of Executive Women’s Star Award in recognition of her creation of economic value and her contribution to the community at large.

President George W. Bush appointed Mrs. Girard-diCarlo to be a council member at the United States Holocaust Memorial Museum, and she served on the USHMM council from 2005 until 2011.  A native of Elkins Park, Pa., Mrs. Girard-diCarlo earned a bachelor’s degree in economics from the University of Miami.

Ambassador David F. Girard-diCarlo, Ret. is a 1973 graduate of Villanova University Charles Widger School of Law, where he was editor-in-chief of the Villanova Law Review and chairman of the honor board. Mr. Girard-diCarlo had served for 22 years as managing partner and then chairman of Blank Rome LLP, one of the 100 largest law firms in the United States, and had also served as chairman and CEO of Blank Rome Government Relations LLC, when he was appointed by President George W. Bush in 2008 and confirmed by the Senate to serve as U.S. Ambassador to the Republic of Austria. In that role, Ambassador Girard-diCarlo oversaw more than 500 U.S. and Austrian employees at the Embassy. Ambassador Girard-diCarlo’s responsibilities also included oversight of the operations of the U.S. Mission to the United Nations in Vienna and the U.S. Mission to the Organization for Security and Cooperation in Europe.

Actively involved in politics for more than three decades, Mr. Girard-diCarlo held positions with numerous local, state and federal campaigns and served as co-chairman of the host committee for the 2000 Republican National Convention held in Philadelphia.

Mr. Girard-diCarlo served on the boards of numerous public companies and governmental entities, including PNC Financial Services Group, Midlantic Corporation, Continental Bank, Pennoni Associates, the National Railroad Passenger Corporation (AMTRAK) and the Philadelphia School Reform Commission. He served as chairman of the board of both the Southeastern Pennsylvania Transportation Authority and the Greater Philadelphia Chamber of Commerce.

An active participant in the cultural communities in which he lived and worked, Mr. Girard-diCarlo served in leadership positions at the John F. Kennedy Center for the Performing Arts in Washington, DC, the Walnut Street Theatre in Philadelphia, The Philadelphia Orchestra Association, the Gettysburg Foundation, the National Constitution Center and Saint Joseph’s University, among others.

Mr. Girard-diCarlo has received numerous awards and honors, including the Americanism Award from the Anti-Defamation League; the Judge Learned Hand Human Relations Award from the American Jewish Committee; and the Pontifical Honor of Knight of the Order of St. Gregory the Great, conferred upon him by Pope John Paul II for his work as chairman of Business Leaders Organized for Catholic Schools.

Mr. Girard-diCarlo has been an active alumnus of the Law School throughout the years, having served as chairman and now life member of the Board of Consultors. In 2003, Mr. Girard-diCarlo was recognized for his ongoing commitment to Villanova Law as the recipient of the Law School’s Gerald Abraham Award for Distinguished Service. He has chaired major fundraising campaigns for the Law School, including the Reuschlein Fund, the Law School’s first capital campaign, and the Campaign for Villanova Law, which helped fund the construction of the current School of Law building. As part of that second campaign, Ambassador and Mrs. Girard-diCarlo generously donated the funding for the Student Lounge. Born in Bryn Mawr, Pa., Mr. Girard-diCarlo graduated from Saint Joseph’s University with a bachelor’s degree in history. He was awarded an honorary degree from Drexel University.